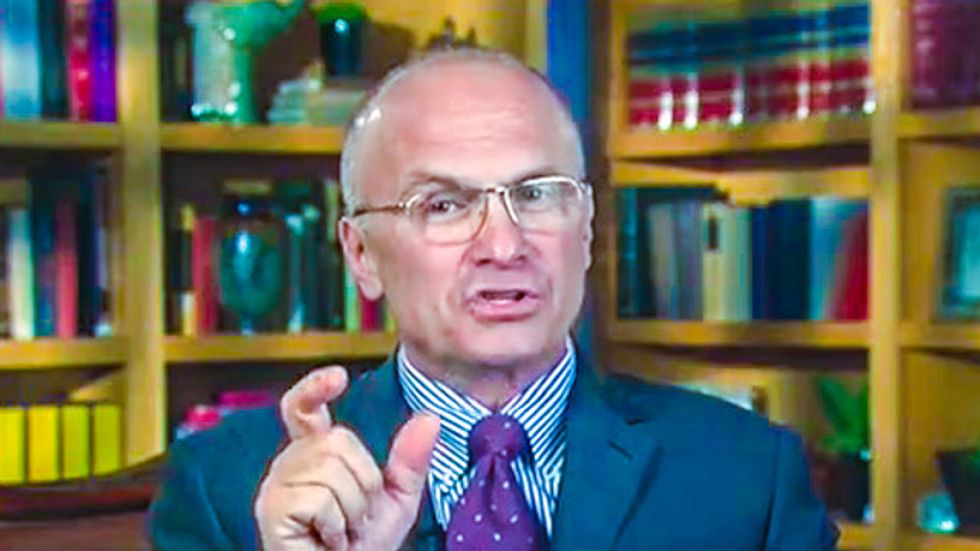 A multimillionaire fast-food CEO on Monday cited President Barack Obama's health care reform law as a reason not to raise the minimum wage, and asserted that increases would only hurt low-wage employees.

According to Forbes, CKE restaurants CEO Andy Puzder makes 291 times more than the minimum wage employees at fast-food chains Hardees and Carl’s Jr., which are owned by his company, but he told Yahoo! Finance on Monday that his opposition to pay hikes was only about the welfare of the workers.

"I just want to make sure people understand the consequences of raising the minimum wage, which is... youth unemployment, and increased prices, and more automation," Puzder explained. "Labor participation for people 16 to 29 years old is plummeting, and it's plummeting because we're pricing them out of the market with these minimum wage increases, and there are experienced workers who are willing to take the jobs because they've had their hours cut to under 30 [hours per week] because of Obamacare."

Yahoo! host Shibani Joshi noted that surveys had shown that the median age of fast-food employees was 29, and more than half of the workers were forced to use welfare programs.

"So, is youth unemployment really the focus here, when the older 29 year olds are the ones that are getting really getting impacted, and they're on public assistance because their wages aren't high enough?" Joshi asked.

Puzder argued that less than 5 percent of employees over 21 at Carl's Jr. were on minimum wage. And if the minimum wage was increased then younger potential workers would be "at home looking at posters from the last election or waiting for mom to make dinner, as opposed to being out there actually working, and getting the experience they need to go forward in life."

"There are a lot of Americans who are just trying to make ends meet," Joshi observed. "It's not just people working at your stores, Carl's Jr. and Arby's and other stores. It affects a lot of other companies as well, and it affects their quality of life."

Puzder insisted that the solution was a "dynamic, growing economy" instead of a minimum wage increase because "if people have jobs, their wages go up."

"You can't solve that problem by having the government artificially mandate a wage increase when there is no economic growth to support that," he opined. "If government gets out of the way, businesses will create jobs, wages will go up, and the country will go back to a state of prosperity instead of what we're in now."

As Huffington Post pointed out, Puzder did not address the imbalance between minimum wage workers and fast-food CEOs, who make 721 times more on average.

Watch the video below from Yahoo! Finance, broadcast July 7, 2014.