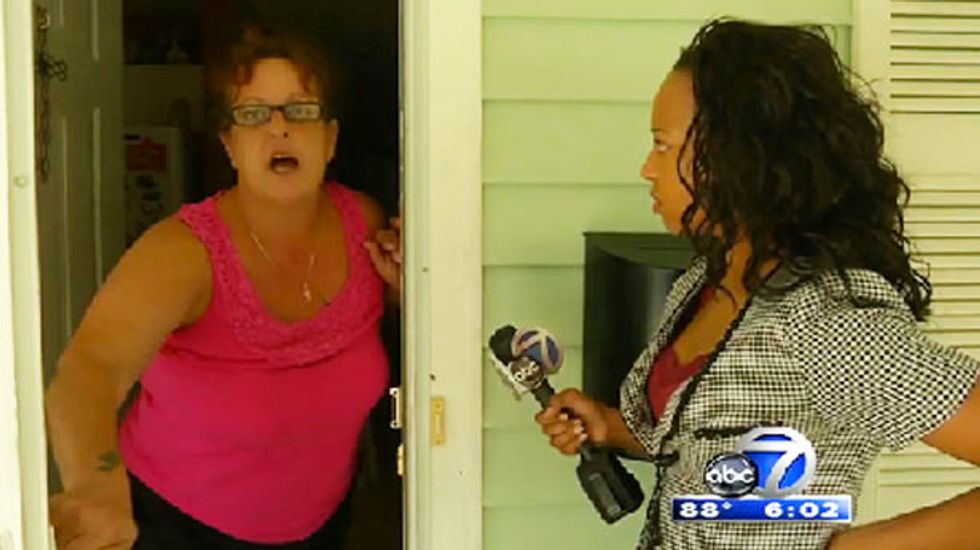 A former Sarasota school bus driver, who is the star of a video filmed by her neighbors showing her calling one neighbor a 'black f*cking n*gger,' has told a WWSB reporter that she is not a racist.

In the video, uploaded to YouTube and Facebook by her neighbors, Pamela Michener, 52,  can be heard yelling at a neighborhood woman, telling her she is a "black f*cking n*gger."

Michener then bellows, “Let me tell you something, you fat f*cking n*gger, maybe if you disciplined your f*cking n*gger, stinky-ass black children, I wouldn’t have to put my two cents in.”

Neighbors explained that this is not the first tirade delivered by the woman, known in the neighborhood as a school bus driver, so they posted the video online to draw attention to the her with the school district.

"I posted the video and I wanted everyone to see this is who is working with our kids,” explained Mya Ronk, Michener's neighbor. “Everyone was outraged."

"You have these kids, how could you work with kids when you don’t like a certain type of people?" Ronk wondered.

With the video going viral, WSSB dispatched reporter Bobeth Yates to speak with Michener to get her side of the story.

“First of all, I’m not a racist … it’s just the opposite,” Michener explained before dismissing the reporter.

As she closed the door, Yates  asked about the specific words Michener used in front of the neighborhood children, and the woman replied, "Well, what do you expect? My life is threatened, okay? I have people attacking me all the time. What do you expect?”

During her video tirade, Michener can also be heard threatening,"I'll slit your f*cking throat."

Michener, who according to authorities was charged in 2012 for an attack on an elderly person, resigned as a school bus driver for the Sarasota school district this past May.

Watch the video below from WWSB: