'Freedom'-loving waitresses, diners 'throwing guns and Jesus all over the place' at CO eatery 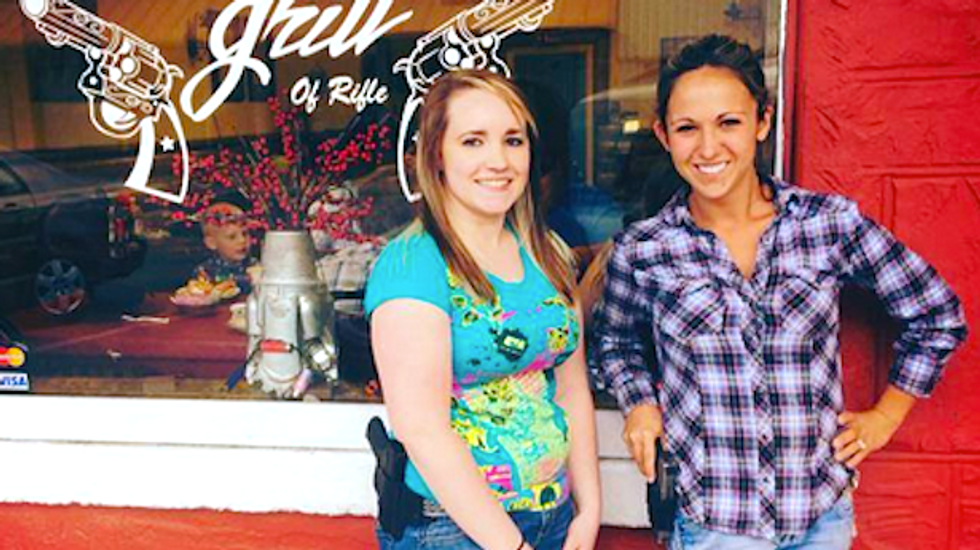 Waitresses in a town called Rifle carry pistols when they serve customers at Shooters Grill.

The owners of the western Colorado eatery encourage customers to carry loaded firearms, too: “Guns are welcome on premises,” reads a sign on the front door. “Please keep all weapons holstered, unless the need arises. In such cases, judicious marksmanship is appreciated.”

“We encourage it, and the customers love that they can come here and express their rights,” Boebert said. “This country was founded on our freedom. People can come in carrying their gun, and they can pray over their food.”

The restaurant hosts concealed carry training for $75, including dinner, that qualifies them for Colorado and Utah permits.

Shooters doesn’t serve alcohol, and Boebert said the name she chose for the restaurant threw off some of her friends.

“I consulted with my Christian friends and everyone said ‘Shooters’ sounded like a bar or a strip joint,” Boebert said. “But I thought, this is Rifle — it was founded around guns and the Old West. We called it Shooters and started throwing guns and Jesus all over the place.”

Rifle got its name, according to town legend, when a surveyor left his weapon leaning against a tree, and violent crime is rare in the 9,172-person city along Interstate 70.

The last shooting death was in 2001, when Michael Stagner shot seven people, killing four, while ranting about illegal immigrants. He was later found not guilty by reason of insanity.

“We think it’s just fine — we’re very positive about it,” said Wayne Greenwald said. “We carry guns ourselves and own a rifle, shotgun and handguns. We live in a very small town and we take care of our own crime problems.”

Servers are not required to openly carry firearms, which is permitted under state law, but they're invited to do so.

“The people who are here, they want to be here, they like the food, they like our means of transporting the food with our firearms at our sides,” Boebert said.