Georgia cop shoots dog, threatens owner with arrest when he attempts to take dog to the vet 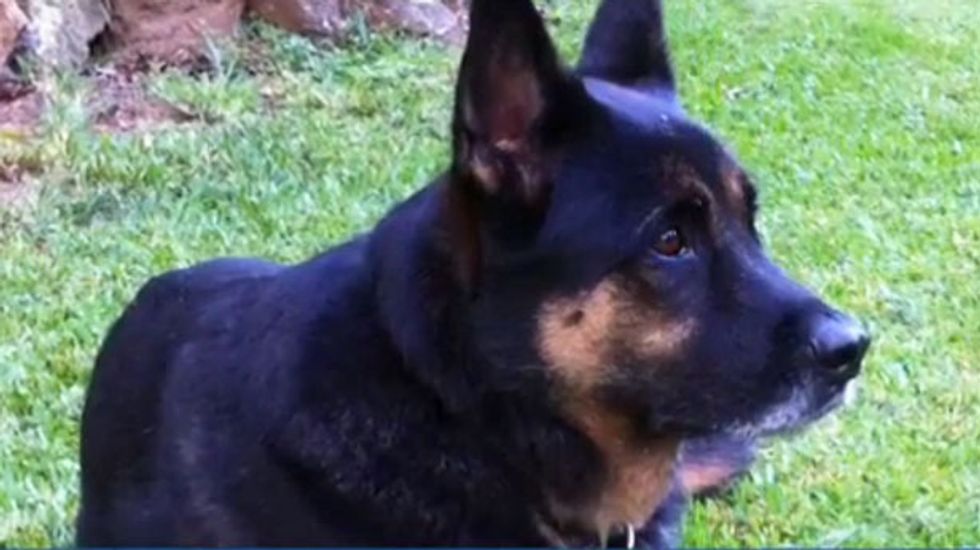 A Georgia man has accused a Dekalb County police officer of shooting his dog and then threatening him with arrest when he attempted to take the dog to a veterinarian in order to save its life.

"No steps were taken by DeKalb police whatsoever to try to save my dog's life," Tim Theall said.

The dog, a 9-year-old German Shepard named Doctor, survived and is expected to recover, leaving his owner with extensive medical bills.

According to Theall, he let Doctor out of a fenced backyard and the dog immediately ran to the front of the house. Before Theall could follow he heard two shots, and an officer exclaim, "Holy [expletive]."

According to authorities the officers were responding to false alarm in the neighborhood.

Theill came around the corner of his to find his dog, shot through the jaw. When Thiell attempted to take the wounded dog to the hospital, he says the police officer attempted to block him.

"The dog was still alive clearly, bleeding like crazy," Thiell recalled. "And the police officer blocked my exit."

Thiell claims the officer blocked his car several times as he and his wife attempted to leave with the dog.

"Finally he convinced me that I would be thrown in jail if I didn't just stay where I was," Thiell said.

After other officers arrived, Thiell was finally allowed to take Doctor to the vet, more than an hour after the shooting.

According to Thiell's wife, Melissa Brewer, the officer who shot the dog said animal control had been contacted and would be arriving to "assist."

On a gofundme page she set up to help with veterinary bills, Brewer wrote, "I find out that animal control was told to come pick up a dead dog and had no idea about the dog needing help aka still being alive. I asked the cop who shot him why he lied and he stated that he never promised help was coming."

In a statement, DeKalb County Police spokesman Capt. Stephen Fore said that the incident was under investigation, adding that officers are trained to preserve evidence at a shooting scene. Fore said but he understood Thiell's concern over the dog not being taken for treatment immediately, and that the department's policies would be reviewed.

Watch the video below from 11Alive Atlanta:

Sen. Marco Rubio (R-FL) called impeachment a "waste of time," and he was drowned in fury and ridicule for sucking up to former president Donald Trump.

The Florida Republican made clear he would not vote to convict Trump for inciting a violent insurrection Jan. 6 at the U.S. Capitol in a last-ditch effort to stop the certification of President Joe Biden's election win.

The word "deprogramming" is typically used in connection with extremist religious cults such as the Unification Church, the Tony & Susan Alamo Christian Foundation or Jim Jones' the People's Temple, but cults can be political as well — for example, the QAnon movement. Political science expert Brian Klaas, in a Washington Post op-ed published on January 25, lays out some reasons why it is so difficult to "deprogram" Americans who have embraced far-right political cults and outlandish conspiracy theories.

"For the past four years, the United States was governed by a conspiracy theorist in chief," explains Klaas, who teaches global politics at University College London. "Whether by retweeting QAnon accounts from the Oval Office or painting himself as the victim of shadowy 'deep state' plots at rallies, President Donald Trump injected the toxin of baseless conspiratorial thinking straight into America's political bloodstream. On January 6, America saw how far that venom had spread as a ragtag group of militias, racist extremists and flag-waving disciples of Trumpism stormed the Capitol."