GOP lawmaker: You will 'rethink everything' when full 9/11 report is released 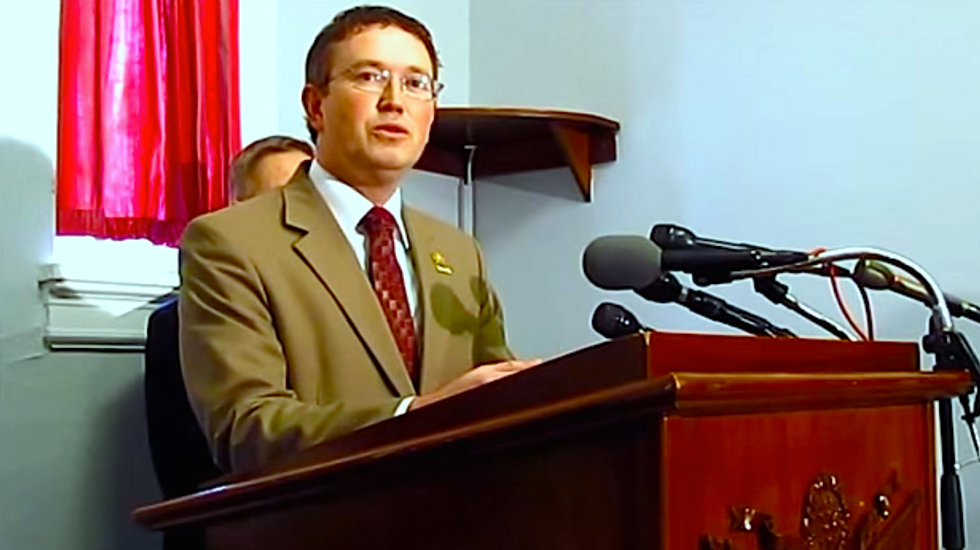 A Republican lawmaker renewed his call for the release of 28 redacted pages from the investigative report into the 9/11 terrorist attacks -- which a left-wing fringe group claims implicates the British monarchy.

Rep. Thomas Massie (R-KY) appeared Wednesday on the Glenn Beck Program to discuss the excerpt, which he and two other current lawmakers and one former lawmaker were permitted to read earlier this year.

The Tea Party-backed freshman lawmaker, who was one of five House Republicans who voted against authorizing Speaker John Boehner to sue President Barack Obama, posted video earlier this month from a news conference on those classified portions of the "Joint Inquiry into Intelligence Community Activities Before and After the Terrorist Attacks of September 11, 2001."

"It is sort of shocking when you read it," Massie told reporters. "As I read it, we all had our own experience, I had to stop every couple of pages and absorb and try to rearrange my understanding of history for the past 13 years and the years leading up to that. It challenges you to rethink everything."

Massie appeared alongside Reps. Walter Jones (R-NC) and Stephen Lynch (D-MA), who cosponsored legislation to release the classified pages after being allowed to read them – but not to publicly discuss their contents.

Although the news conference was held in March, the newly posted video prompted renewed online coverage – and an invitation to appear on Beck’s syndicated radio program.

Massie told Beck the revelations would not “tear our country apart,” although he said there would be “anger, frustration, and embarrassment when these 28 pages finally come out.”

“If we’re going to use 9/11 as a motivation to get involved in these civil wars in the Middle East, (lawmakers and the public) need to read these pages and understand what truly caused 9/11 and who our friends are and who our enemies are,” Massie said.

According to Jones’ friends in the Lyndon LaRouche movement, which has claimed knowledge of some contents of those 28 pages since at least 2009, those duplicitous friends are Great Britain and Saudi Arabia.

“We know exactly who did it: It was done by the British monarchy,” said LaRouche, the conspiracy theorist and perennial candidate for president. “The British monarchy set the whole thing up. That's the guilty party, and that's what the cover-up is all about.”

LaRouche has suggested for years that Britain controls the world’s political economy and international drug trade using strategies – such as funding terrorists to destabilize nation-states – developed by medieval Venice.

Jones and Lynch pressed for months to gain access to the redacted documents – which are left blank in the published report.

Jones has appeared on the LaRouche PAC’s radio program and has addressed the LaRouche movement's Schiller Institute.

LaRouche’s website contains a number of links to documents suggesting 9/11 – as well as the Sept. 11, 2012, terrorist attacks in Benghazi, Libya – was funded as part of the ongoing Al Yamamah weapons-for-oil deal set up by the British aerospace company BAE Systems and the Saudi government.

LaRouche’s “Executive Intelligence Review” publication claims to have evidence about the findings provided by former Sen. Bob Graham (D-FL), who has seen the 28 redacted pages and has called for additional investigation into the Saudis’ role in 9/11.

“Despite the carefully orchestrated campaign to protect our Saudi ‘friends,’ ample evidence of Saudi Arabia's intimate ties to al-Qaeda and the 9/11 attacks has come to light,” Graham said.

Bob Kerrey, a former U.S. senator who served on the 9/11 Commission, has also suggested the role of Saudi Arabia needs to be further investigated. A U.S. counter-terrorism report released in 2008 concluded Saudi Arabia was the leading source of money for Al Qaeda.