'I am not a statistic': An actual poor person testifies at Paul Ryan's 'war on poverty' hearings 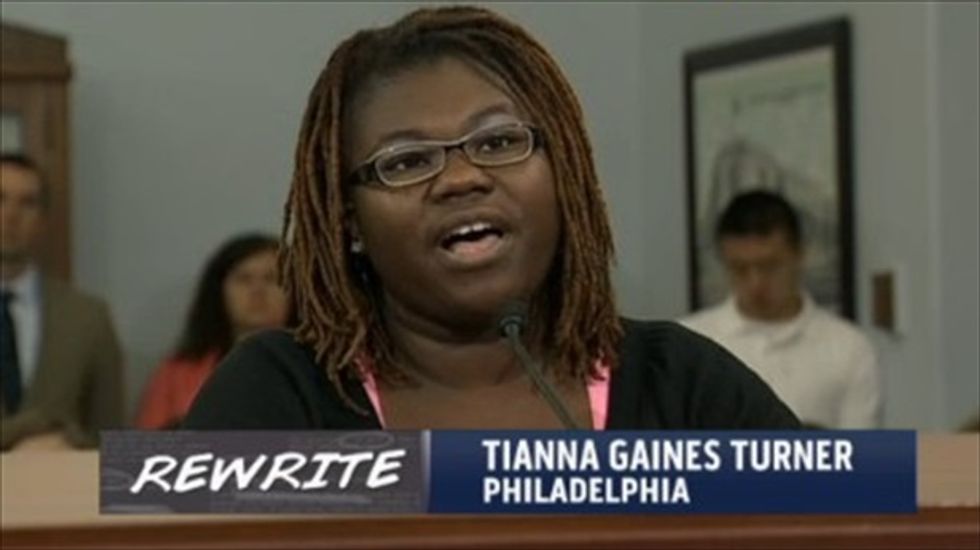 For the first time, Rep. Paul Ryan's (R-WI) "progress report on the war on poverty" heard from a person actually experiencing it, MSNBC host Lawrence O'Donnell reported on Wednesday.

"I am not a number. I am not a statistic," Tianna Gaines-Turner testified before a House Budget Committee hearing earlier in the day. "I am not a food stamp [recipient]. I am an individual who lives in the inner city who just so happens to be, right now, struggling, just like so many Americans are struggling."

Gaines-Turner, who lives with her husband and their three children in Philadelphia, currently makes $10.88 an hour as a childcare provider. Her husband, who works at a local food market, makes $8.25 an hour. However, she said, her hours were recently cut because of budget issues.

Think Progress reported that all three of their children suffer from asthma, and two of them suffer from epilepsy. Besides using the Supplemental Nutrition Assistance Program (SNAP) -- commonly known as "food stamps" -- the children are enrolled in the Children’s Health Insurance Program (CHIP), allowing them to receive medication they need to manage their conditions.

"We're always trying to climb up," she testified. "There is a constant climb, and that is the one thing that is important for me being here today, is for people to understand. Could anyone live off of that amount of money like I do, me and my husband, every day? Every month? Every week?"

Gaines-Turner was allowed to testify in part because Rep. Barbara Lee (R-CA), who has urged Ryan, the committee's chair, to let her speak to the committee since last year. The Nation reported last August that Ryan hesitated at first, claiming that he could not add her to the list of speakers. The committee, however, did accept her written testimony at that time.

"The food stamps program is very important to me and to my family," she testified on Wednesday, during the committee's fifth hearing. "Nobody wakes up in the morning and says, 'We want to be in poverty. We want to stand in a 2-hour line at a food pantry to get to the front just be told there isn't any food.'"

Ryan has frequently advocated cutting funding for federal assistance programs like SNAP to help the country balance the budget, but earlier this year, some of the economists he cited in his research said he misrepresented their data to support his argument.

Watch footage from Gaines-Turner's testimony, as aired on MSNBC on Wednesday, below.