Joan Walsh on McCain: 'Cowardly' is putting Palin 'a heartbeat away from the presidency' 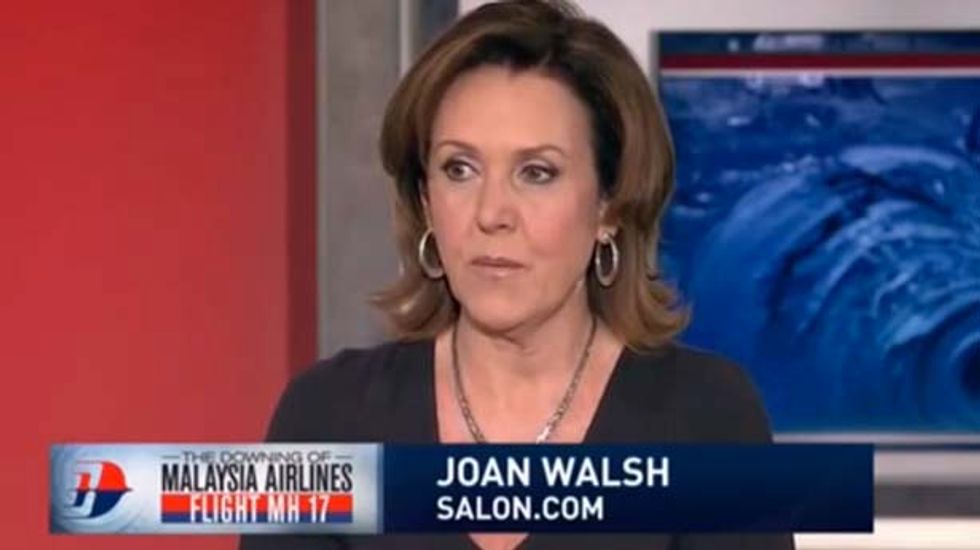 Appearing on MSNBC’s PoliticsNation with host Al Sharpton, Salon columnist Joan Walsh defended President Barack Obama against Senator John McCain's accusation of cowardice in response to the shooting down of flight MH17, bringing up a sore point for McCain: his selection of Sarah Palin as his running mate in 2008.

In a recent interview on Fox's Hannity, the former presidential nominee accused the Obama administration of cowardice stating, "It’s just been cowardly. It’s a cowardly administration that we failed to give the Ukrainians weapons with which to defend themselves."

Speaking on MSNBC, Walsh reminded the former naval pilot and POW that his comments were disrespectful to the commander-in-chief.

"You don’t say that about the commander-in-chief,” Walsh said.

Walsh continued by mentioning the former half-term governor from Alaska who burst upon the national scene after McCain selected her as his running mate in his ill-fated 2008 presidential run.

“This is a man, I respect him for his service, but if we’re going to talk cowardly, somebody tried to put Sarah Palin a heartbeat away from the presidency so that he hoped to hold onto his right-wing base," Walsh said. "I mean, somebody that has a lot to atone for and a lot to think about and shouldn’t be tossing around words like cowardly.”

Walsh also criticized McCain for calling the President AWOL, saying, "You know what they do to people who are AWOL. This is, again, the extremism of this rhetoric."

Watch the video below, uploaded to YouTube by Harper Poppy: