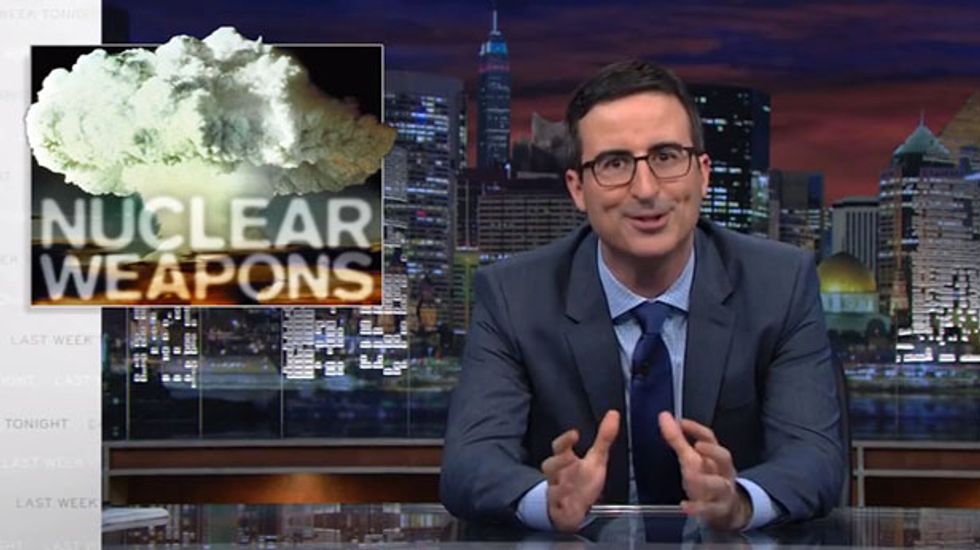 On the most recent Last Week Tonight on HBO, host John Oliver took up the very important, but much ignored, topic of America’s aging nuclear arsenal. Oliver noted  our weapons facilities are plagued by crumbling infrastructure, suspect military oversight, politicians refusing to cut-off funding, and computers so old they run on floppy disks.

Pointing out that, despite cut backs in our nuclear arsenal, America still maintains 4,804 nuclear warheads, Oliver notes that is enough to "not only destroy Earth, but provide 4th of July fireworks for Martians."

Oliver detailed incompetence by crews staffing the silos, with one crew earning a 'D' grade in proficiency, and another crew being stripped of certification after being caught cheating on tests after receiving the answers via text from a fellow officer.

"They texted the answers? Those answers should not be textable," Oliver explained. "You should not be able to answer 'how do you prevent the launch of Minuteman III's' with emojis."

Oliver saved up much of his sarcasm for the officers overseeing the nuclear arsenal, focusing on Maj. Gen. Michael Carey who was relieved of duty for, among other things, drunkenness and boorishness when meeting with his Russian counterparts.

"Just think about that," Oliver asked. "The man overseeing our ICBMs was too drunk for the Russians. The Russians."

Oliver then related the story of Carey forcing his staff to go  with him to a Mexican restaurant in Russia because he wanted to see a Beatles cover band where, later in the evening, the commanding officer got drunk and instructed an aide to ask the band if he could go on stage to play guitar -- even though he doesn't know how to play the guitar.

"Take a moment to consider the run of poor decisions that are required before you're being told you can't play guitar, with a Beatles cover band, when you're drunk at a Mexican restaurant in Russia, Oliver said. "Add all that up together and then consider this man had access to our deadliest nuclear warheads."

Oliver ended by pointing out that America seems uninterested in our nuclear arsenal, allowing politicians to keep funding for unnecessary bases in their states for purely political reasons.

After showing a clip of Congressman Steve Daines (R-MT) asking for funding to maintain missile silos because it would be cheaper than building new ones if we ever needed them again, Oliver asked, "Let me get this straight. You are spending money on something you don't need, in the hopes that you'll be saving money on the oft chance that one day you eventually do.... What exactly are you saying there?"

Oliver concluded, "That is some weapons-grade bullshit."