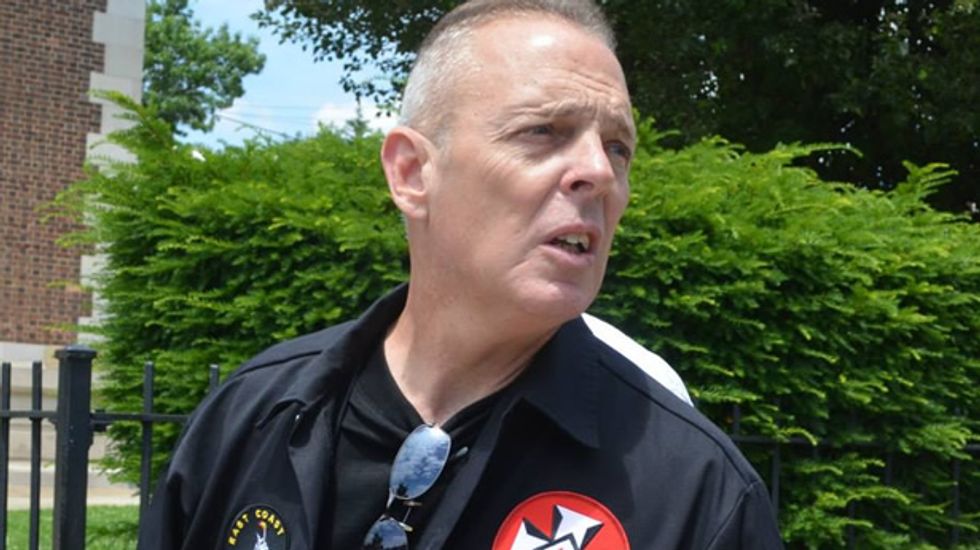 A white supremacist who claims a religious belief in white supremacy explained his views this week to Fox News radio host Alan Colmes.

William Walters was removed last week from his post on the Tacony (Pa.) Town Watch after city officials discovered he was passing out Ku Klux Klan recruitment literature on the job, although they were previously aware he served as Grand Dragon of the Pennsylvania-based group.

He described the East Coast Knights of the True Invisible Empire as a “white Christian organization,” and Colmes reminds him that Jesus wasn’t white.

“I don’t know that,” Walters says after a long pause.

Colmes says Jesus would have been an olive-skinned person of Mediterranean descent, but Walters points out that “he’s not black, either.”

Walters admits that Jesus associated with society’s outcasts and taught that his followers should love everyone.

“He did preach that, yes,” Walters concedes. “He preached love.”

Colmes asks why his group restricts membership to white Christians only, and Walters brings up the NAACP – which the host reminds him that white people may join.

“We’re just showing interest in our race,” Walters insists. “Why? Because we want to promote the heritage of our white race. We want to keep it that way.”

He admits that the KKK is a white supremacist group, although he claims that it also promotes Christian tenets.

Even so, Walters insists he has “quite a few friends that are black people.”

“My best friends are black, but they don’t belong to our organization,” he says. “We don’t believe they should have any relationship, we don’t believe in mixed races. It’s common sense. If you look at the animal species, let’s just say. You don’t see a rabbit going with a squirrel.”

Colmes asks if he’s aware that white people and black people are the same species, and Walters agrees they are.

Walters concedes this is true, but says the KKK promotes racial purity so children won’t get “mixed up” about their heritage.

“I don’t believe that’s a race -- I believe being Jewish is more of a religion,” Walters says, adding that he would accept a Jewish person into his family if they converted to Christianity.

Walters insists he treated his black neighbors fairly during his stint on the neighborhood watch.

“We’re trying to promote white race and the heritage, just like the blacks,” he adds.