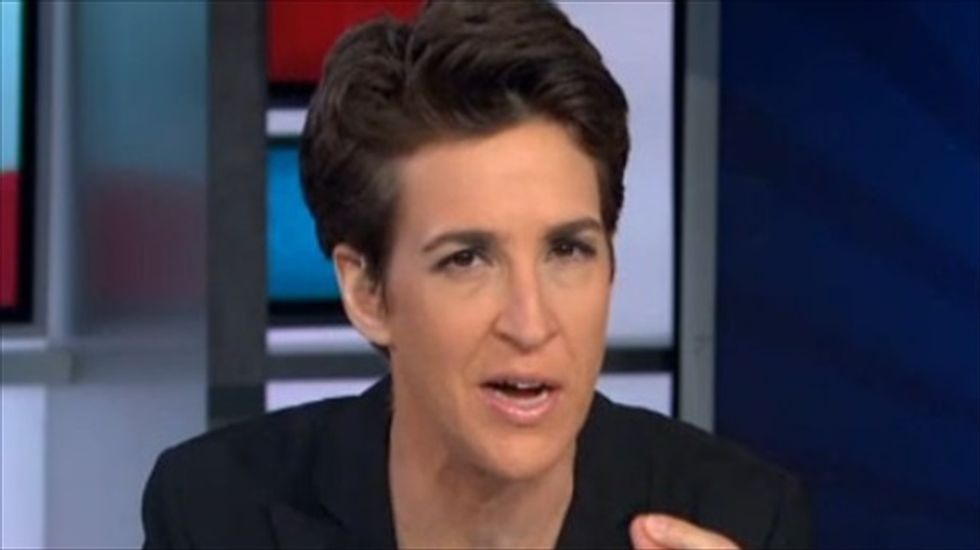 On Friday night, MSNBC's Rachel Maddow recounted a NATO warning from June 30, in which the group of nations warned that Russia was training Ukrainian separatists how to use sophisticated anti-aircraft surface-to-air weapons.

Maddow began the segment by noting that two journalists have left the TV and web network Russia Today over its dishonest coverage of the Ukraine, both Putin's invasion and the crash of Malaysia airlines flight MH17.

U.N. Ambassador Samantha Power and others on the Security Council are laying the blame squarely at Russia's feet, for arming and training the pro-Russian Ukraine separatists and provoking a situation where a disaster like this was possible.

"We know these separatists have received a steady stream of support from Russia," said President Barack Obama in a speech yesterday. The rebels claimed to have shot down a Ukrainian helicopter, cargo plane and fighter jet prior to the downing the the Malaysian Airlines passenger flight.

"And that is why Russia is doing everything it can to change the narrative," said Maddow.

The world is largely unconvinced by Russian President Vladimir Putin's misinformation smoke screen. Maddow suggested, however, that western governments and media should be equally wary of what the Ukrainian government claims about the crash.

"But with that in mind, it is possible to focus very tightly on the most important parts of what we really do know," she said.

We know, she said, that the airliner was flying at an altitude of more than 30,000 feet. We know that the type of shoulder-mounted rocket launchers common to the area are not capable of striking an object that far off the ground.

The weapons in the region that are capable of striking objects at that height are 18 feet long and shot from launchers that have to be towed by trucks. That kind of heavy materiel, Maddow said, could only have come to the separatist rebels from Russia.

Furthermore, she said it takes a lot of training to operate these weapons. You don't just learn to use them "on a firing range," she said. It requires weeks or months to learn to operate one of these systems.

We had some warning on this, she went on to say. Two weeks ago, on June 30, Air Force Gen. Phillip Breedlove spoke at the Pentagon.

Maddow reported, "And in that press briefing, he said that surface-to-air missiles, anti-aircraft systems, not just the shoulder-fired ones, but the big, vehicle-borne surface-to-air missiles that are designed to shoot down airplanes, those had been observed in eastern Ukraine and just across the border in Western Russia."

NATO had observed in the early part of the summer, that Russia was moving heavy anti-aircraft equipment over the border into Ukraine and training the rebels there to use them.

"This was sort of a dry Pentagon briefing from two-and-a-half weeks ago," said Maddow, "talking about something that wasn't getting all that much attention at the time, but all of a sudden, what he just said there was maybe the most important thing in the whole world."

Two-and-a-half weeks ago, she said, NATO knew this was a possibility. And then on Monday, "they proved that it was true" when the separatist rebels shot down a Ukrainian transport plane, followed on Wednesday by the destruction of Flight MH17.

"That is not conjecture," she said, "that is what we know."

So now, she said, the question is what Russia's going to do about it.