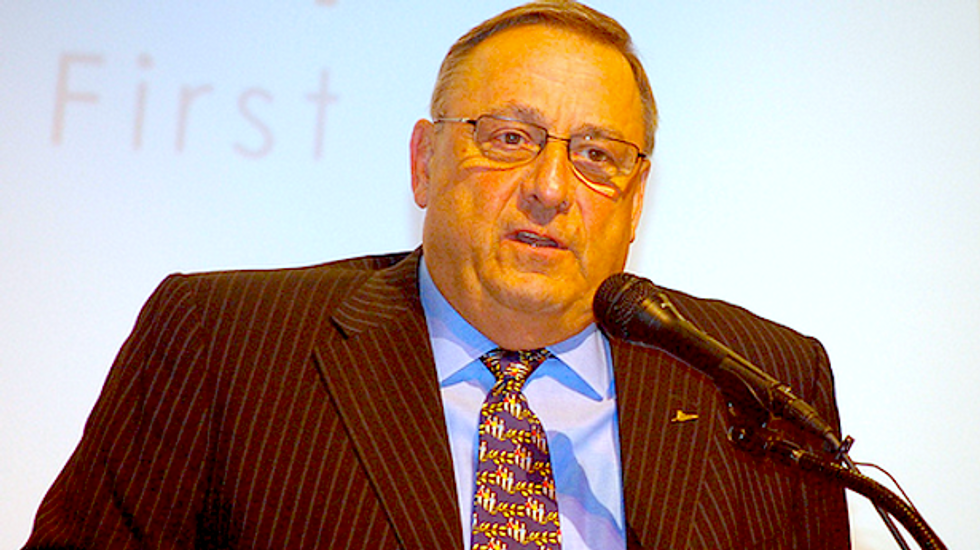 Maine’s Republican governor vehemently denied claims in a forthcoming book that he discussed executing the state’s Democratic speaker of the House and Senate president.

A pair of “sovereign citizen” radio hosts said last year on their “Aroostook Watchmen” program that they had met with Gov. Paul LePage and talked about hanging as the punishment for high treason – which the broadcasters believed the Democratic lawmakers had committed.

Tipping has launched an online fundraising campaign to pay for the book, which has not yet been published.

“He allowed them to present a number of conspiracy theories, told them he agreed with their interpretation of state law, promised to publicize their beliefs, (and) discussed with them the arrest and hanging of [House Speaker Mark] Eves and [Senate President Justin] Alfond,” Tipping wrote.

The group claimed to have “remonstrances,” or documents they said gave them the authority to arrest and execute the legislative leaders, Tipping reported.

The governor publicly endorsed several sovereign citizen beliefs they had discussed, including comparisons of the U.S. government to Nazi Germany, claims that wind power is a hoax, and describing the county sheriff as the highest law enforcement official.

LePage threatened to sue Tipping, who published an excerpt from the book on Talking Points Memo, and the Bangor Daily News, which reported the claims.

“I was never in the room where ‘execute’ was used,” LePage told the Bangor Daily News. “It never happened. We did not discuss execution, arrest, or hanging.”

Tipping claims that LePage met with the sovereign citizens at least eight times in nine months.

The group urged the governor to abandon the U.S. dollar as the state’s official currency and return to the gold standard or create a new currency called “MaineBucks.”

They also asked LePage to make changes to the Maine Criminal Justice Academy training manual to remove a notation that the FBI considers them to be part of a “domestic terrorist movement.”

Sovereign citizens generally believe they are not subject to U.S. or state laws, but only to God’s law or common law, and they frequently refer to law enforcement personnel as terrorists.

Tipping claims in his book that the sovereign citizen broadcasters, Steve Martin and Jack McCarthy, discussed various conspiracy theories with the governor – although LePage claims he spoke only about the U.S. and Maine constitutions with the pair and disagreed with many of their points.

Alfond called the meetings “disturbing and irresponsible” and wondered whether the governor had validated the sovereign citizens’ views by meeting with them.

“We have zero tolerance for threats of violence, whether on the playground or at the State House, and instead of shutting it down, Gov. LePage entertained their delusional thoughts and gave these people a voice,” Alfond said in a statement.

LePage said he meets with constituents and groups from a variety of backgrounds and viewpoints, although he had a dispute last year with Democratic legislative leaders who claimed the governor called off scheduled meetings with them.

Tipping, who is actively supporting Democratic challenger Mike Michaud in the gubernatorial race, said LePage has refused to meet with him.

LePage said he stopped meeting with the sovereign citizens because “they were not listening,” and he claims he never knew that Tipping had filed public records requests about the meetings discussed by the pair on their radio program.

Tipping reported that lawyers on the governor’s staff warned LePage the sovereign citizens had no basis in law for their claims and that he should stop associating with him.

The governor said Martin and McCarthy were angry after he stopped meeting with them, although they asked to do so again after Tipping’s claims were reported.

LePage said he told the sovereign citizens “no way.”

The pair LePage met with are still trying to have Eves and Alfond arrested and have taken out notices in newspapers and are holding symposiums around the state to promote their ideas.

Listen to the sovereign citizens discuss their views (NSFW language) in a video posted online by Maine Politics:

[Image via Maine Department of Education/Flickr]