Maryland GOP candidate is a neo-Confederate who believes in creationism, but not state laws 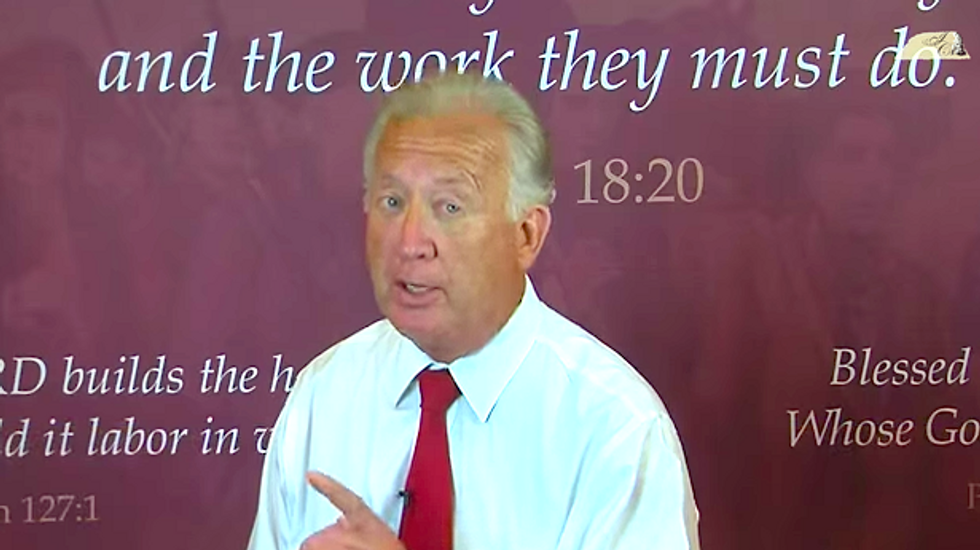 Republican voters in Maryland have chosen as their nominee for Anne Arundel County Council a neo-Confederate creationist who believes local law enforcement should disobey “invalid” laws passed by the state’s General Assembly.

Michael Peroutka, who won the Republican nomination in the District Council race last month, donated a dinosaur skeleton earlier this year to the Creation Museum in Petersburg, Kentucky.

More than half of the 10-foot-tall, 30-foot-long allosaurus’ bones were found, and they were arranged in their correct anatomical positions, rather than scattered – which is frequently the case – which the museum has said this suggests rapid burial and therefore confirms the biblical flood.

The 61-year-old Peroutka is a debt collection lawyer, former Constitution Party candidate for president, and former board member for the neo-Confederate League of the South.

Peroutka believes the Maryland General Assembly is “no longer a valid legislative body” because it had passed laws that “violate God’s law,” such as a marriage equality bill, a transgender rights bill, an assault weapons ban, and a stormwater runoff fee.

These laws, Peroutka said in a video posted last month on the Institute of the Constitution’s YouTube channel, meant none of the laws passed by the Assembly were “legally valid and legally enforceable.”

“Is it possible that those who are sworn to uphold the law, such as police and sheriffs and judges and prosecutors, may soon come to the conclusion that the enactments of this body should be ignored because they are based not in law, but in lawlessness?” Peroutka said.

That’s pretty much what Oath Keepers propose – and Peroutka has shared a stage and other connections with some of that right-wing group’s leaders.

In another video, Peroutka promotes the idea that states and local law enforcement should “interpose” themselves between Americans – whom he describes as innocent victims – and the federal government – which he compares to a vicious dog and even calls a “monster.”

He claims the Declaration of Independence establishes this right, although state and federal courts have repeatedly rejected the theories of interposition or nullification since shortly after the nation’s founding.

The Civil War ended most nullification efforts, but southern states unsuccessfully attempted to use interposition and nullification to halt school integration in the 1950s.

Peroutka has denied he’s a white supremacist and claims racism is “immoral and shameful,” but he canceled his cable TV service after gay NFL player Michael Sam kissed his boyfriend during the NFL draft broadcast.

He runs a foundation with his brother to help fund anti-abortion groups, although the foundation purchased the dinosaur fossils donated to the Creation Museum.

“The promotion of evolution is an act of disloyalty to America,” Peroutka said. “What I’m saying is that there is no way you could promote or believe in evolution and sing ‘God Bless America’ during the 7th inning stretch. All men are created equal, they are not evolved equal, get it?”

Watch Peroutka explain his views on the Maryland General Assembly in this video posted online by TheAmericanView: