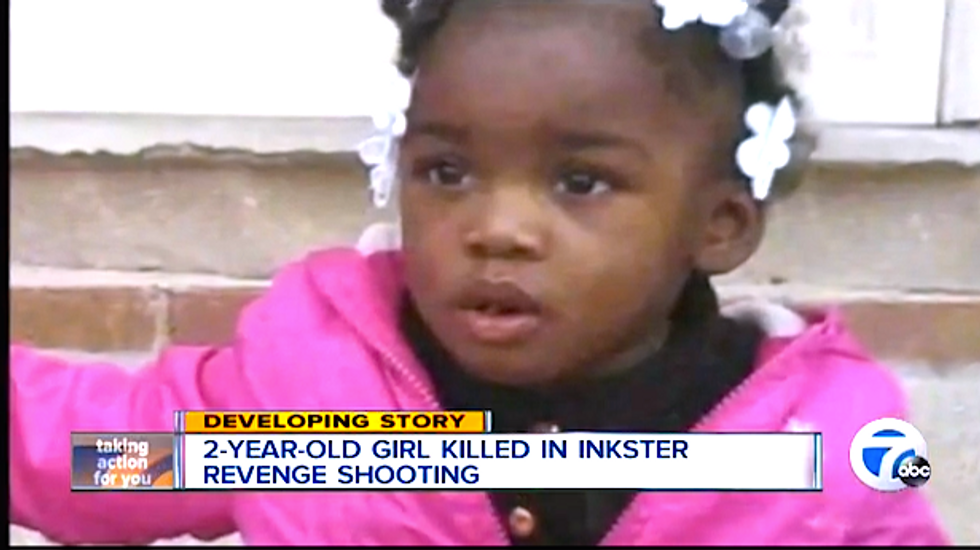 Police said a triple shooting that left a Detroit-area toddler dead was in apparent retribution for an April shooting that wounded three people outside a nightclub.

The suspected gunman was among those wounded in the earlier shooting, officers said.

Witnesses said the gunman walked up to two children playing in a yard Tuesday in Inkster, shot a 2-year-old girl at point-blank range and then shot her father and a 12-year-old girl, who was struck multiple times.

Kamiya French, who would have turned 3 next week, was pronounced dead at the scene.

Authorities said the older girl, who is a relative, was critically injured, and the slain girl’s 34-year-old father, Kenny French, had non-life-threatening injuries.

“This Inkster, stuff like this happens all the time, but not to kids,” said neighbor Monique Cruz. “Not the babies. It don’t make sense because her daddy is loved by everybody.”

Another neighbor said the child’s shooting violated the “code of the streets.”

“We’re talking about a senseless murder,” said Antwan Harrison. “A guy with no morals. The innocent shouldn't have to pay for our suffering.”

The shooting suspect was later arrested at his girlfriend’s house, police said.

Police said they don’t believe the children were targeted, despite the way the toddler was shot, but “just happened to be there.”

Officers are seeking a second person who drove the shooter to the house in a white van and waited as the gunman “casually” walked up to the yard, fired multiple shots, and then rode away in the vehicle.