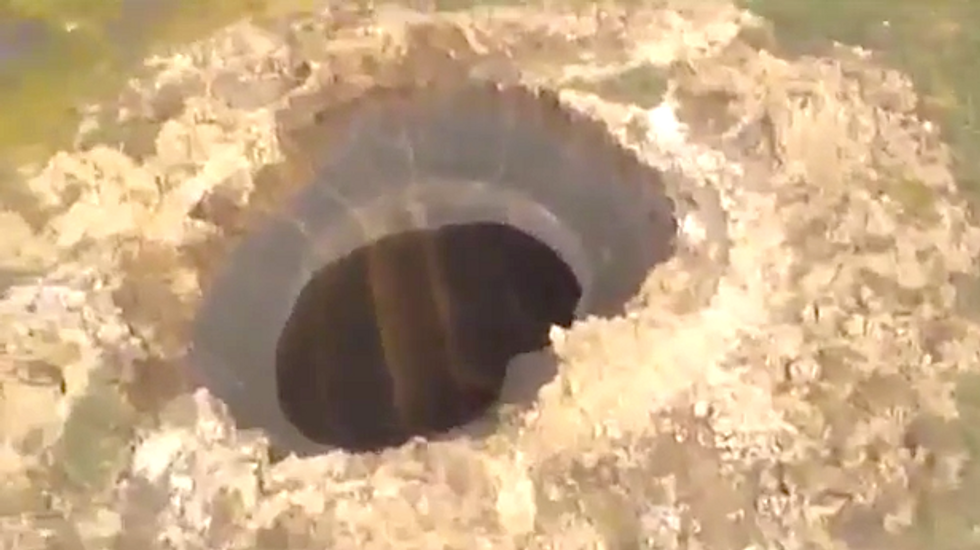 The likely explanation is less supernatural, scientists say, but no less extraordinary.

The Siberian Times reported the hole – which is more than 260 feet across and of unknown depth – was spotted from helicopters flying over the gas-rich Yamal Peninsula.

A team of Russian scientists is on its way to investigate the crater, which is apparently large enough for several Mi-8 helicopters to fly into – although none have.

Conspiracy theory websites have speculated the crater was caused by alien spacecraft or related to the “hollow Earth” theory.

Aerial video footage shows debris and apparent signs of an explosion or impact around the massive crater, which is about 18 miles from the area’s biggest gas field, Bovanenkovo.

Dr. Chris Fogwill, a polar scientist from the University of New South Wales, said the crater was most likely caused by a geological phenomenon called a pingo.

A pingo is a block of ice that forms under frozen arctic hillsides that can eventually push through the earth and leave an exposed crater once it melts away.

Fogwill said the permafrost can be hundreds or even thousands of feet thick, allowing for very large ice formations.

“This is obviously a very extreme version of that,” Fogwill said, “and if there’s been any interaction with the gas in the area, that is a question that could only be answered by going there.”

The crater is located within the Yamalo-Nenets Autonomous Okrug oil and gas region, which was discovered in 1972 and developed in 2012 by Russian oil company Gazprom.

Fogwill said global warming may cause more pingos – which are sometimes so large they can be seen from space – as permafrost and other arctic ice formations melt.

“We’re seeing much more activity in permafrost areas than we’ve seen in the historical past,” Fogwill said. “A lot of this relates to this high degree of warming around these high arctic areas which are experiencing some of the highest rates of warming on Earth.”

Watch video of the hole posted online by Siberian Times: