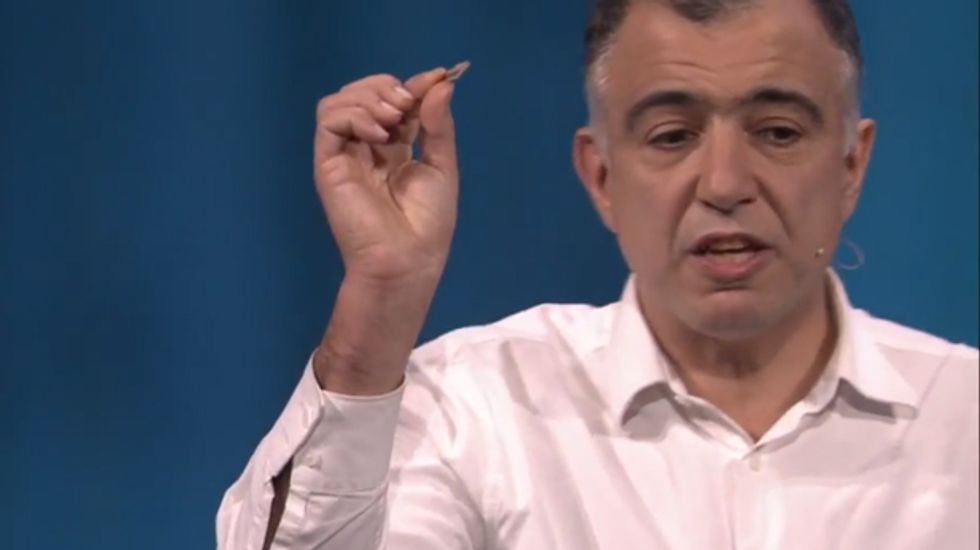 There was a time when the closest Christofer Toumazou thought he would get to the hallowed halls of Imperial College in London was when he was walking down Exhibition road on the way to the science museum, with the workshops of the esteemed institution visible on his right.

But at age 23, and without an O level or A level – let alone an Oxbridge degree – on his CV, the young engineer was accepted for a postdoctoral position in the university, beginning a career from there which would see him create a combined digital and analogue mobile phone, an artificial pancreas for type one diabetics and a wireless heart monitor, among other inventions.

It is his latest creation, however, which has sparked the most interest and last month earned him a European Inventor award. Using a small silicon microchip in a USB, a 'lab on a chip' as it has been coined, DNA data can be analysed within minutes and outside a laboratory.

The new technology is aimed at identifying predispositions for hereditary diseases like diabetes and prescribing the exact right dosage for medications, cutting down on the cost of current DNA testing machines.

"My dream was to have a handheld consumer device with … a little USB stick that could look at rapidly screening for genetic mutations of particular diseases, whether it is a predisposition to type two diabetes [or] whether to a type of breast cancer," said Toumazou in his office in the Institute of Biomedical Engineering.

The new DNA analysis method is the latest instalment in a far from traditional career path for the Greek-Cypriot. Having left school in Cheltenham at 16 with a "few CSEs", the most typical route for him to follow would have been in the family catering business until he became inspired by an aunt's husband who was an engineer and from there developed an interest in electrical engineering.

Encouraged to do a one year radio and electronics certificate – when the "whole Greek Cypriot contingent of Cheltenham turned up" on his first day – he says he found the environment in which he wanted to thrive and went on to a two year general engineering course, a degree at the then Oxford polytechnic and later a PhD. By 23, he had applied for a postdoctoral position at Imperial College and was offered it the same day.

The position involved working with industry to reduce the size of a satellite phone at a time when his interest was in analogue – speech, sound and vision – electronics. Thaksin Shinawatra, the former Thai prime minister who then ran a mobile phone operator, asked him to make a combined digital and analogue mobile phone in the 90s, which led to the establishment of Toumaz Technology, a commercial spin-off.

His next inspiration came in combining the biological and electronic, working on cochlear implants and directing Toumazou towards healthcare. "I was very keen on bringing medical grade technology to the consumer," he said.

Later came the Sensium, a processor termed a "digital plaster" which could monitor vital health signs – heart rate, respiration and temperature among others – of patients and then send them to a nurses' station, cutting down on the gaps between observations and leading to prioritisation of patients in accident and emergency departments.

At around the same time, his son Marcus – now in his early 20s – got renal failure when he was nine years old. "For the first time I was on the receiving side of what medical technology was like rather than being in a plush environment trying to develop all these super duper widgets and gadgets and it really, really frightened me," he said.

This personal development led him to focus on technology which could detect hereditary diseases like his son had which, while it would not have prevented it, would have been able to help manage his condition better.

Describing his DNA analysis system as his "simplest invention but most significant", Toumazou focuses on the fact that humans differ by 0.1%. That difference, he says, shows whether people can metabolise drugs properly and whether there are different genetic conditions present.

His invention uses small silicon microchips which can identify genetic differences which dictate a person's inclination to hereditary diseases like diabetes or how they will react to a drug like warfarin, which is used to treat blood clots.

To use the 'lab on a chip' system, a sample of saliva or a swab from inside the mouth is taken and put inside a container with the chip inside. The chip is then put inside a USB stick and plugged into a computer after which results are returned within about 30 minutes.

One of the key benefits is the speed of the return of information, said Toumazou. In a situation where a drug is needed to counter a hospital-based infection, the new technology could help determine what drug is needed in a short space of time instead of waiting and risking fatality. Cost savings on conventional DNA-sequencing machines opens the possibility for use in areas like sub-Saharan Africa where clinics can be poorly equipped.

DNA Electronics, the company set up by Toumazou around the technology, licences out its patents to companies including Roche, Life Technologies and the National Institute for Health Research of the NHS.

The technology has also been licensed out to Geneu, a cosmetics company based on New Bond Street where bespoke anti-ageing products are created based on DNA testing. Toumazou says "real science" will get recognised in the industry where there is so much "placebo science" and will help in wider acceptance of his invention.

"If it gets recognised, then it will help with my big picture of getting consumer acceptance. It takes the stigma away from it being a medial device and then I can go back to the big picture and it is all about lifestyle," he said.

The DNA testing takes place on the "lab on a chip" where organic semiconductors and sensors which use tiny amounts of chemicals do tests on the spot. The chip can recognise a genetic mutation in a sample which is placed on it and return the results in minutes. This allows the identification of certain hereditary diseases like diabetes. It is through this technology that Toumazou claims doctors will soon be looking at a patient's future medical records instead of their past.

Watch Chris Toumazou demonstrated some of his inventions at TEDMED 2011: