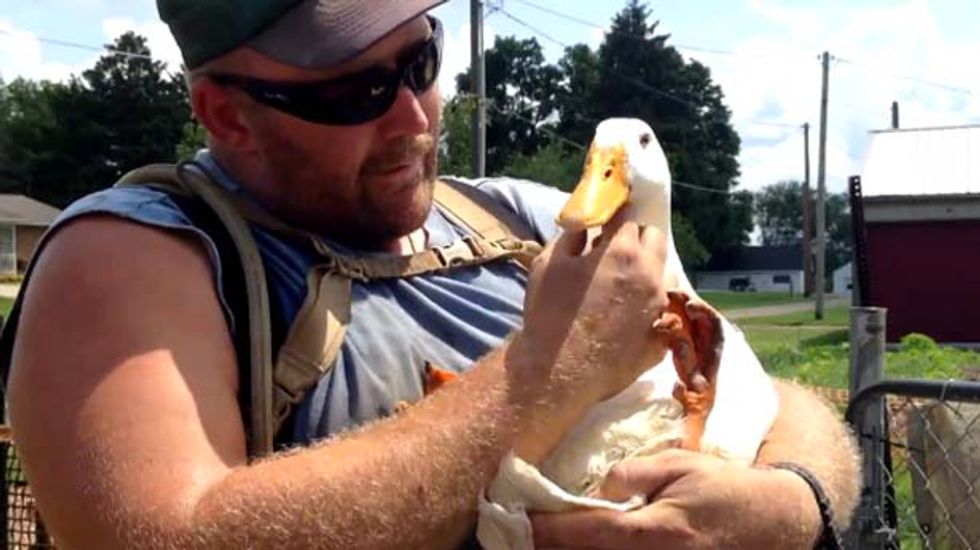 An Iraq war veteran, living in West Lafayette, Ohio, is facing a $150 fine and the possibility that he must get rid of his 14 therapy ducks after running afoul of of a village ordinance banning the keeping of farm animals.

Darin Welker, 36, acquired the ducks after serving a year in Iraq, returning with a back injury and post-traumatic stress disorder (PTSD), reports the Marion Star.

“I came back with a major back injury, and between the back injury and the PTSD that I also brought home, there were numerous problems,” Welker said.

The VA paid for a surgery on Welker's back but did not approve the physical therapy recommended by his surgeon, nor did it provide mental therapy, Welker said.

Welker said he heard about using ducks as therapy and thought it couldn’t hurt to try.

"We got them for multiple reasons. One of the biggest was to get me some basic physical therapy and out of the chair when I was pulled out, and it got me motivated to do something," Welker explained.

“Taking care of them is both mental and physical therapy,” he said. “(Watching them) keeps you entertained for hours at a time.”

The 14 ducks live in a penned-in area in Welker's backyard, where he maintains several kiddie pools so that they can swim.

Despite having a letter from the Mental Health Department of the U.S. Department of Veteran Affairs recommending he keep the ducks, Welker is facing a hearing Wednesday in Coshocton Municipal Court, where he is subject to a $150 fine and could be forced to get rid of the ducks.

According to Welker, village officials told him to get rid of the ducks in May and then cited him for a minor misdemeanor on June 23 when he failed to comply. comply.

A West Lafayette law, adopted in 2010, states, "chickens, turkeys, ducks, live poultry or fowl of any kind, horses, ponies, cows, calves, goats, sheep, or live animals of any kind except dogs, cats, gerbils, hamsters, guinea pigs, birds or mice shall be kept in the Village."

There is a precedent where West Lafayette could amend the law in the case of therapy animals.

Last year, the Coshocton City Council amended a law regarding the keeping and raising of farm animals in city limits, allowing one pot-bellied pig per household, stating the pig must be registered within 30 days of ownership with the mayor’s office, and a doctor must certify the pig is a therapy pet.

The law was changed due to the case of Mary Smith, who used her pot-bellied pig as therapy for her scoliosis and for her wheelchair-bound daughter’s spina bifida.

Watch the video below from The Marion Star: