Open-carry advocate: When our arguments fail, we must vote with our guns 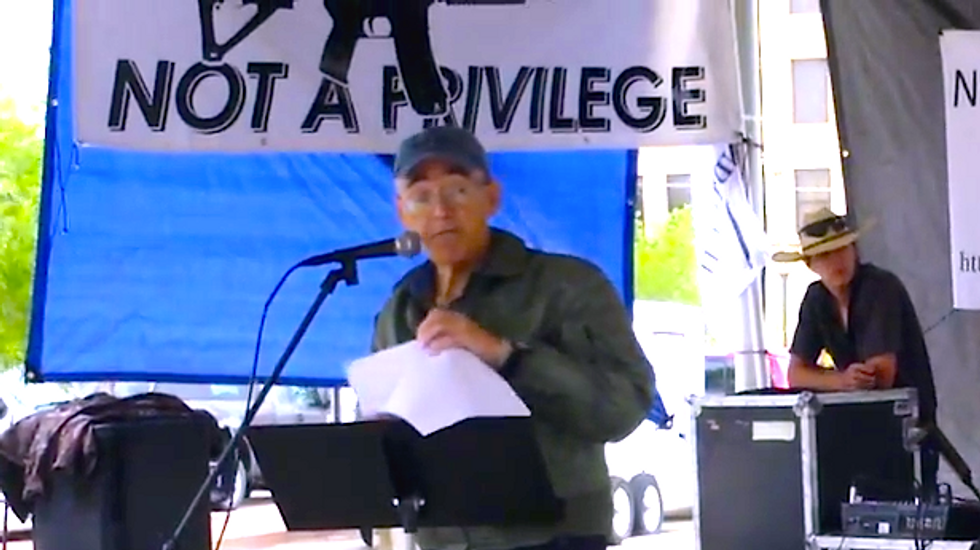 A pro-gun, anti-government activist who encourages armed resistance to “tyrannical” government forces suggested to a cheering crowd that they should turn their sights – if not their guns – on their fellow American citizens.

Mike Vanderboegh spoke late last month to the Howard County chapter of Open Carry Texas, where he offered a false dichotomy to frame the long-running debate on federalism as a life-and-death struggle between patriots and domestic enemies.

“We are at present two peoples -- two countries, really, living within a common border and sharing mostly a common language, but divided upon the answer to this question: Does the government serve the people or do the people serve the government?” Vanderboegh said.

The co-founder of the right-wing “Three Percenters” group told the gun-rights activists that the Obama administration had violated the Founders’ vision of government.

“This administration, this regime, seems to operate ever more increasingly as a lawless gang than not on the rule of law but rather on the rule of men -- which is to say the law of the jungle, enforced by the iron fist of government power,” Vanderboegh said.

He said such “mutually exclusive” political views could not peacefully coexist, and he said violence was inevitable.

“We like to think that all our fellow Americans, even those who plainly state that they are committed to stealing our liberty and our property and attempting to control our very lives, are merely suffering from differences of opinion that can be overcome by the right mix of persuasion or electoral politics,” Vanderboegh said.

“Yet how many of us have tried such methods with every fiber of our being and fallen short?” he continued. “Not because we were wrong, but because those of the other side were impervious to such arguments, to such tactics, for they believe completely in their right to their appetites for our liberty, our property, and our lives with all the religious fervor of a pagan worship of naked power wrapped in a catechism of lies.”

Vanderboegh said the Founders – and possibly even the Bible – would describe his political rivals as “domestic enemies of the Constitution,” to which the crowd applauded enthusiastically.

He said the Founders had offered a remedy to curb their appetite for power that no oath or law could restrain, and -- standing before a banner bearing the image of an AR-15 rifle and the words, “It’s a right, not a privilege” – Vanderboegh asked the gun enthusiasts search their own feelings for the answer.

“Let us first be honest enough to admit first to ourselves and then to proclaim to those domestic enemies of liberty -- and thence to the world -- that failing all other appeals to peaceful means, that the founders’ solution to such tyranny is still available, still potent, and still waiting, for when democracy turns to tyranny, the armed citizenry still gets to vote,” Vanderboegh said, as the crowd cheered wildly.

“This is the promise, this is the warning,” he continued. “The threat embodied by the Gadsden flag of our founders. Don’t tread on me, it says. Don’t. Tread. On. Us.”