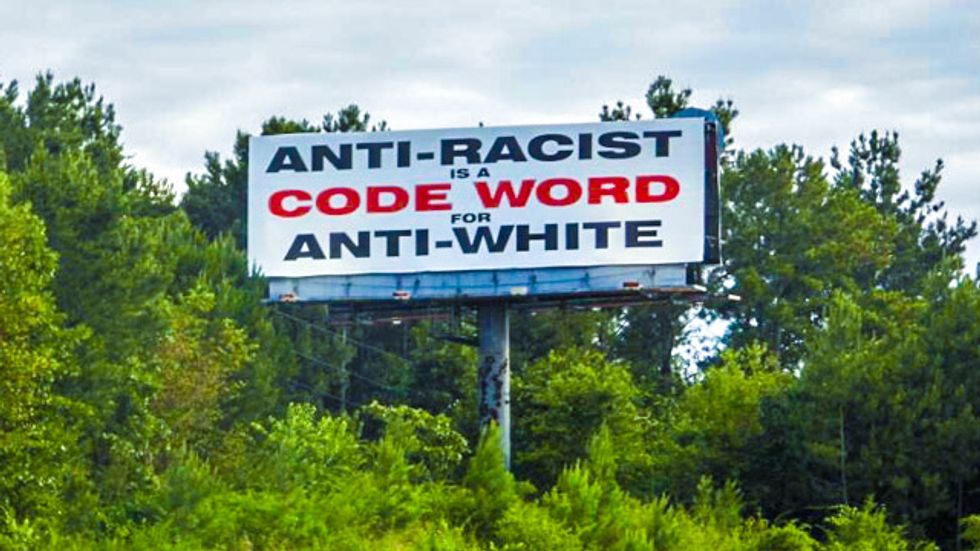 The mayor of an Alabama town has denounced a billboard with a racial message that appeared recently near Birmingham.

"Anti-racist is a code word for anti-white," the billboard alongside I-20 reads.

"While this billboard is actually in Birmingham, the impression to passersby is that it is within our city limits," Leeds Mayor David Miller said in a statement obtained by The Birmingham News. "The City of Leeds is a community with a long history of racial harmony, and wants to make it clear to all that it has no connection with this sign and categorically and unequivocally denounces the racist message portrayed on this billboard."

According to the Southern Poverty Law Center (SPLC), the message originated in a 221-word Mantra written by white supremacist Robert Whitaker. The Mantra has inspired racial killings, including the 2011 deaths of 77 people in Norway.

The Mantra's message -- and the Alabama billboard -- have been heavily promoted by Timothy Gallaher Murdock, who runs an online community for racists called White Rabbit Radio.

"The point of the message is when white people are called racist to give them something to say, something to say to defend themselves so they don't just sit silently keep getting beaten over the head over and over again," Murdock told WBRC on Monday. "You know everyone has come to the conclusion that racism is only in white countries, only in white people's churches, houses and businesses, and white people are generally the only ones who face this charge generally on behalf of white anti-whites as well."

Over the past year, similar billboards have also appeared in Knoxville and Arkansas.

Mayor Miller said he was seeking more information about who put up the billboard.

The video below is an example of how White Rabbit Radio promotes the same message seen in the billboard.

The video below attempts to explains the concept of "white genocide."