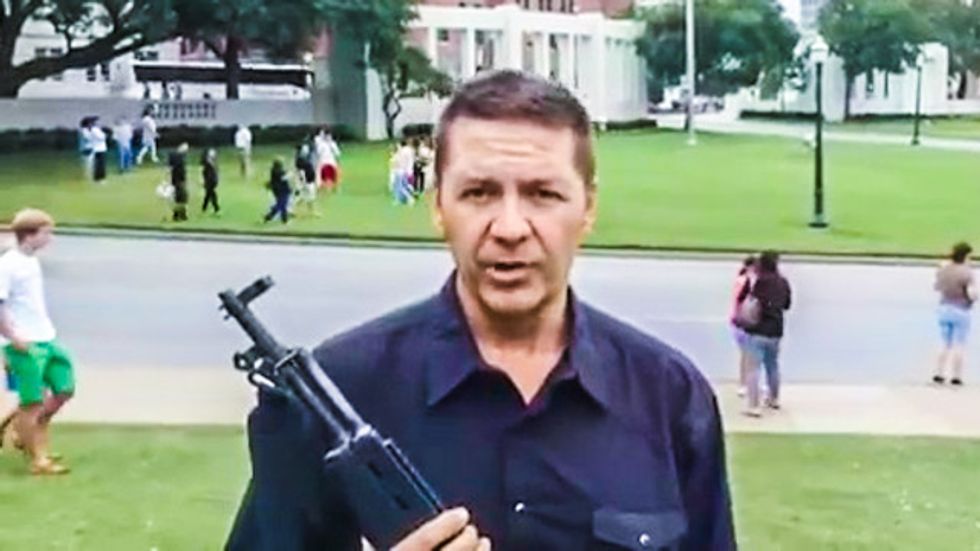 Supporters of open carry gun laws rallied over the weekend by bringing assault-style rifles and other types of firearms to Dealey Plaza, the site of President John F. Kennedy's assassination.

In a video posted to YouTube, activists explain that they return to Dealey Plaza in Dallas each month to exercise their right to openly carry firearms.

Documents displayed by the demonstrators include information about New York Pastor James David Manning, who has criticized President Barack Obama for releasing "the homo demons," and who also believes that Jesus would "stone" LGBT people to death.

In addition to supporting the constitutional right to keep and bear arms, the literature distributed by the activists asserts that President Obama is not a U.S. citizen.

"We ain't going to give up our guns," an activist named Rudy insists. "I'm just sick and tired of these foreigners coming in this country, and they don't have any idea what American freedom is all about."

"And I don't know why that Gov. Rick Perry don't go down there and stop it with the Texas military forces," he added. "I think that he is not doing all that he should do in order to stop illegal immigration into this country. And I am sick and tired of foreigners who don't understand what American freedom is all about. They basically don't even celebrate July the Fourth."

Rudy said that he didn't care how many "false flag" operations "that usurper foreigner president" tried to carry out.

The video ends with an impromptu sermon on the infamous Grassy Knoll about the dangers of women wearing "sexually charged" clothing.

The man preaching notes that President John F. Kennedy would have had a chance to meet God if he had not had a "lustful spirit."

"You are a sinner, you deserve hell!" the preacher shouts.

"Amen!" the leader of the pro-gun protest yells back.