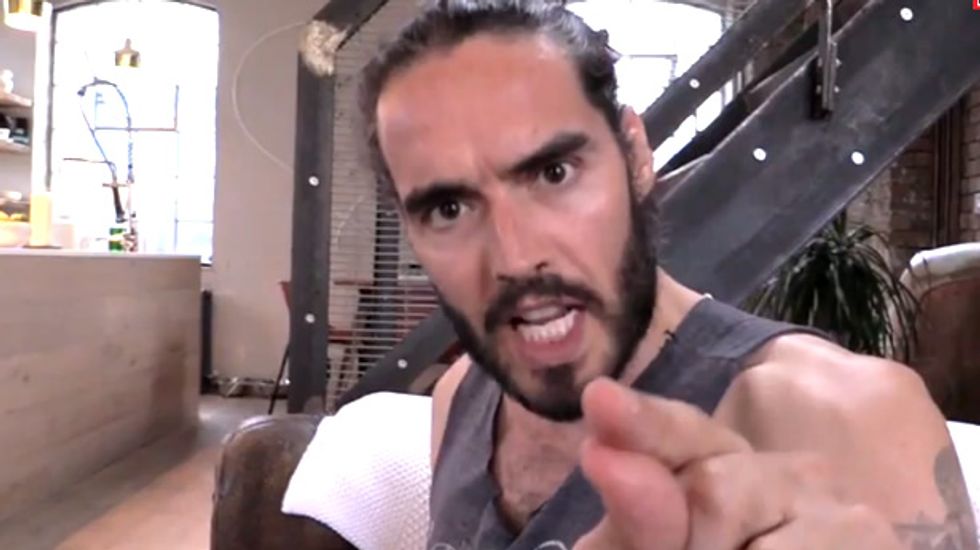 In Russell Brand's latest episode of The Trews, the British comedian attacks Sean Hannity for his hypocrisy when it comes to the subject of Israel.

Brand begins, however, on a lighter note, playing a clip from Hannity's show and saying that the Fox News and syndicated radio host "looks like the Ken Doll from the Toy Story 3 film." Moreover, "he has his name on a police badge in the corner of the screen, screaming 'HANNITY!'"

He then continued his running commentary on the clip, in which Hannity asks why "is America's largest Muslim so-called civil rights group [the Council on American–Islamic Relations or CAIR] showing sympathy to terrorists? Let's have a debate."

Brand then noted that Hannity was "already being unreasonable" in how he framed the debate. While most people "want peace," Hannity "wants conflict -- wants to know what things I should say to exacerbate the conflict."

One of Hannity's guests, Yousef Munayyer of the Jerusalem Fund & Palestine Center, then suggested to Hannity that peace might be achieved if Israel addressed the occupation of Palestinian territory, at which point the Fox News host insisted the debate be brought back to the 1948 petition plan and the 1973 war.

"Yes, let's do that Sean," Brand responded. "Because that's the broader context. But he's not going to actually talk about any of those things, because Sean's not interested in truth -- Hannity is only interested pushing a particular perspective."

He then cuts back to the Hannity clip, in which Hannity does not, in fact, address the broader context, but repeatedly asks what Munayyer would do if people were firing missiles into his neighborhood. Munayyer responds that he's going to try to answer Hannity's question if Hannity would stop "asking it at him," to which Hannity replies, "Good luck."

After playing another clip of Hannity shouting his guest down, Brand notes that "another thing Sean does is just use incendiary words. 'Rockets!' 'Kidnapper!' 'Murder!' 'A little baby duckling kicked in the face!' These are just things that are bad."

As the conversation on Hannity's program continues to deteriorate, Brand remarks that Hannity's not interested in learning about what would constitute progress in the Middle East, because he took a job at Fox News. Imitating Hannity, Brand yells, "I'm interested in shouting, and pointing, and simplifying things!"

When Hannity tires of yelling the same question his guest has already answered, he switches to his other guest, who like himself is pro-Israel. The guest immediately begins discussing the Palestinians using children as human shields, a fact whose veracity Brand disputes.

"Reports from Gaza say that they're not using children as human shields," he say, "those children are dying because there are missiles going off all over the place and Gaza's only a little tiny area."

"But even if they were," Brand continued, "even if everyone was carrying around children literally strapped to wooden boards, using them as shields -- they still wouldn't die if it weren't for the missiles. The key ingredient in the death of those children is the missile."

He then returns to the clip at a point in which Munayyer attempts to get a word in. Hannity summarily dismisses him with an angry "Goodbye!" to which Brand responds, "one definition of terrorism is using intimidation to achieve your goals. Who in that situation was behaving like a terrorist?" he asks.

"Sean Hannity -- that's where the terrorism's coming from."

Watch the entire episode of Russell Brand's The Trews below.