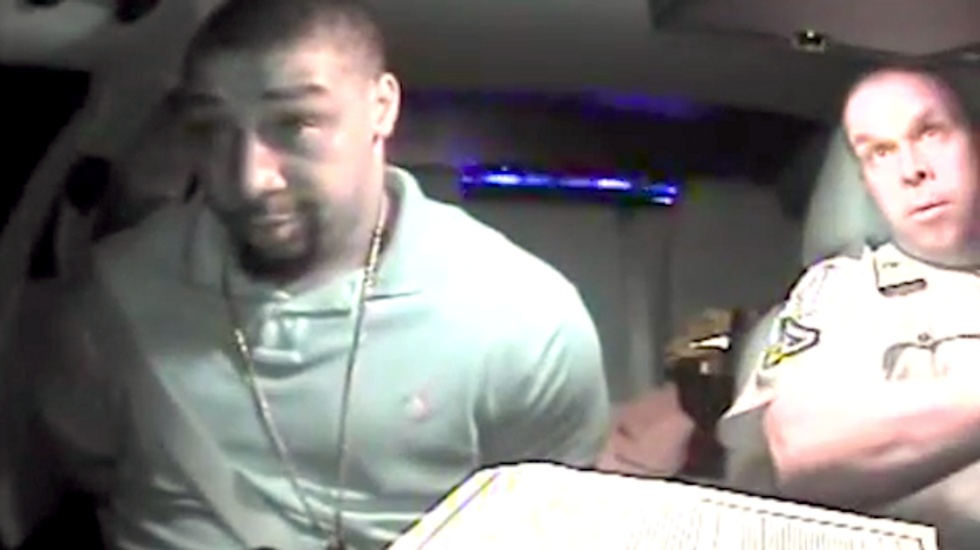 A South Carolina state trooper was suspended after threatening to use a Taser on a Cincinnati Bengals player during a traffic stop last week.

Sam Montgomery, an NFL defensive lineman, was stopped early Wednesday for driving 89 mph in a 55-mph zone in Laurens County.

Video released this week shows Lance Cpl. R.S. Salter, of the South Carolina Highway Patrol, ordering Montgomery to put his hands outside the vehicle, and the player complies.

Salter asks Montgomery if he’s in the military, and he says no but tells the trooper he plays in the NFL.

The trooper quickly tells Montgomery he’s under arrest for driving more than 25 mph over the speed limit and orders him out of the car.

The 6-foot-3, 262-pound Montgomery steps out of the car and calmly attempts to comply with a series of occasionally contradictory commands by Salter.

Montgomery attempts to place his hands behind his back with the palms up while the trooper continuously barks commands at him.

“Sir, if you cannot follow my commands, the next thing you’re going to get is the Taser,” Salter says.

“Whoa, I’m not trying to cause any problems,” Montgomery says, as the trooper tells him to spread his feet and place his hands palms-up behind his back.

Montgomery spent the night in jail and was released Wednesday morning on $355 bond.

The Bengals suspended Montgomery, who was released by the Houston Texans last season for an unspecified violation of team rules and then injured his knee while practicing with the Oakland Raiders.

Salter was also suspended after the traffic stop by the Department of Public Safety, and his conduct during the incident is under investigation by the agency’s Office of Professional Responsibility.

"Salter's behavior during the traffic stop of Mr. Montgomery was not representative of professionalism displayed by our troopers and officers every day around the state," the department said in a statement.

The trooper’s demeanor changes after he and another officer search the player’s car and find no contraband.

Salter helps the handcuffed Montgomery call his mother from inside the patrol car, and he urges the player to go to traffic court to have the penalties reduced.

“I will work with you on your ticket," Salter tells Montgomery. "I'm pretty fair, any man comes to court, asks for help on a ticket, I'll do what I can."

Montgomery admits he was at fault for driving too fast.

Watch video of the arrest posted online by Index-Journal: