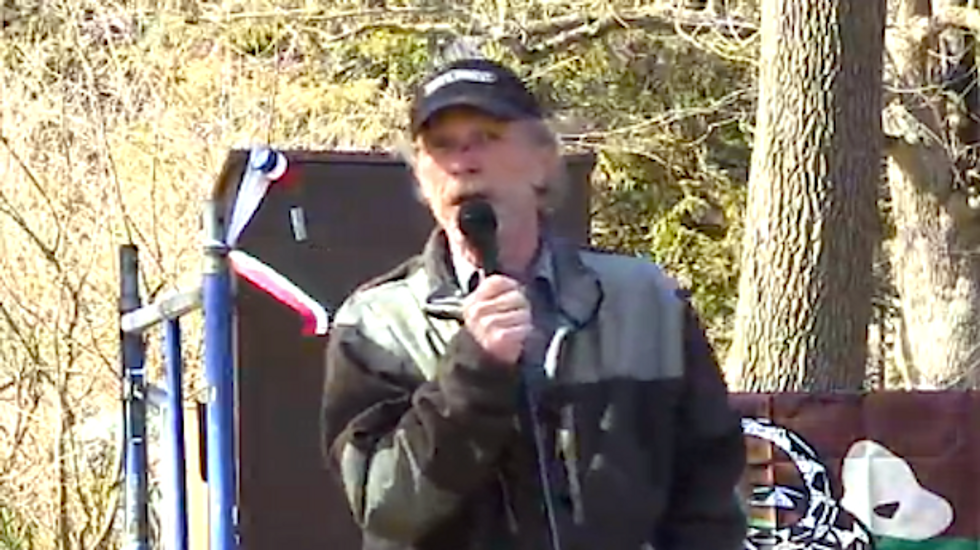 One of the sovereign citizens who met several times with Maine Gov. Paul LePage was convicted Monday of operating a motor vehicle without a license.

Prosecutors said 63-year-old Jack McCarthy purposefully allowed his driver’s license to lapse in 2011, and he was first ticketed for the offense when he was pulled over that same year for having a license plate light out.

He was pulled over again the following year for the offense.

McCarthy requested a jury trial in both cases, and a judge selected one jury to hear both.

Prosecutors said McCarthy essentially challenged the legality of the requirement that drivers obtain and renew a license, arguing the government was too intrusive and did not have the authority to regulate driver’s licenses.

McCarthy compared to his refusal to comply with licensing requirements to “taking a sip out of the ‘negroes only’ drinking fountain.”

“The judge had to explain to the jury in his instructions that the law essentially doesn’t work that way,” said John Pluto, assistant district attorney for Aroostook County. “If he was driving on a public road and if he was driving with a license that was expired, then he was guilty of driving without a license.”

The jury took just 15 minutes of deliberations to convict McCarthy, who was fined $200 on the first charge and $400 for the second one.

The pair discussed with the governor their desire arrest and execute Democratic legislative leaders in Maine, according to claims they made on their radio program.

McCarthy and Martin are members of the Conservative Coalition group, which claims no affiliation with the sovereign citizen movement but shares many of the same beliefs.

For example, both groups question the constitutionality of the Obama administration, most state laws, and the U.S. currency.

Another Conservative Coalition leader, Gary Smart, was ticketed in May for driving with expired registration and inspection stickers but refused to get out of his pickup until the Penobscot County sheriff arrived.

Smart also plans to represent himself in court and challenge the validity of the law, according to court filings he posted online.

"They contain textbook sovereign citizen rhetoric, including the misuse of legal terms, allegations that the government is illegitimate and quotes from bible verses and precedents from the 1800s that he says prove that he is above the law," Tipping reported.

Watch video of McCarthy discussing his views on the Constitution posted online by The Unmasking of Maine.

A patron of a Georgia diner told Fox News on Tuesday that motorcycle companies like Harley-Davidson would be making baby formula if Donald Trump was still president.

Fox News contributor Lawrence Jones visited a restaurant in Brooklet where one man said that he supported both Trump and Georgia Gov. Brian Kemp (R).

Congressional ethics probe into Madison Cawthorn may be doomed from the start: MSNBC columnist

Rep. Madison Cawthorn (R-NC) is facing a two-pronged congressional ethics investigation on his way out of the political door, including a probe into allegations are that he behaved inappropriately with a congressional staffer.

Additionally, the one-term congressman is facing scrutiny for his promotion of a cryptocurrency in which Cawthorn and those involved have been accused of running a pump-and-dump scheme.