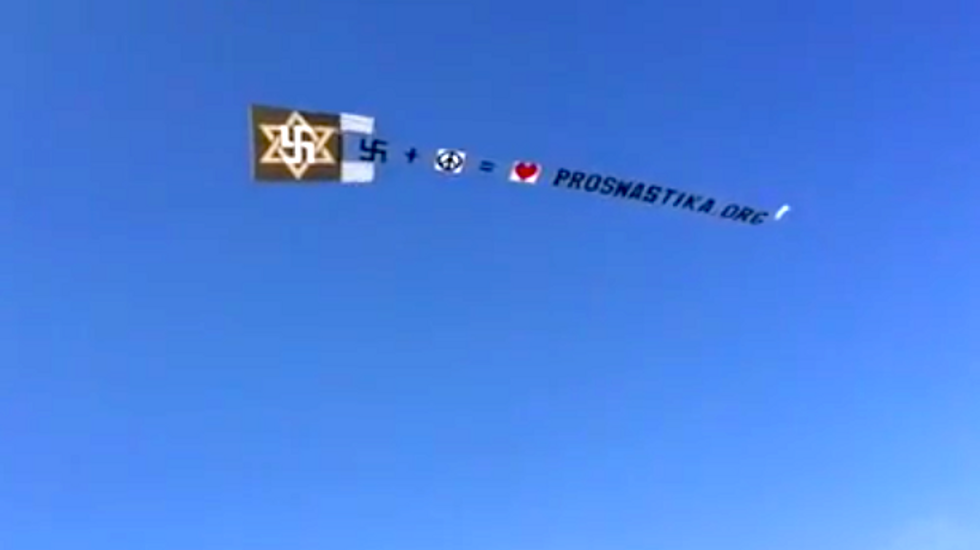 A religious group promoted its efforts to reclaim the swastika as a symbol of peace by flying a banner over New York beaches, upsetting many who saw the display.

The banner, created by the International Raelian Movement, showed a peace sign, a heart symbol, a swastika – an ancient symbol now strongly associated with Nazi Germany – intertwined with the Jewish Star of David symbol, and the URL of the group’s website, proswastika.org.

The Raelian Movement, which promotes uninhibited sexuality, claims Nazi leader Adolph Hitler co-opted the symbol and hopes to “rehabilitate” it.

“By keeping the negative connotation of the swastika and linking it to Hitler, you only give credit to this guy’s monstrosity,” said Thomas Kaenzig, a spokesperson for the organization. “It’s very important to reclaim it and explain to the public that this symbol has a beautiful origin."

The Raelians flew the banner of the Rockways and Coney Island over the weekend as part of its “Swastika Rehabilitation Week.”

“It was horrific,” Ariel Creamer, a 14-year-old who saw the banner near Belle Harbor.

“Try explaining to someone who witnessed their loved ones who were butchered by people under that Nazi symbol that it's anything but a hateful one," Treyger said.

But the Raelians, who believe extraterrestrials created humans thousands of years ago, said the outrage proves a need for the swastika’s rehabilitation.

“As long there are people still offended by it, it means we need to continue our work, to continue to rehabilitate the symbol," Kaenzig said.