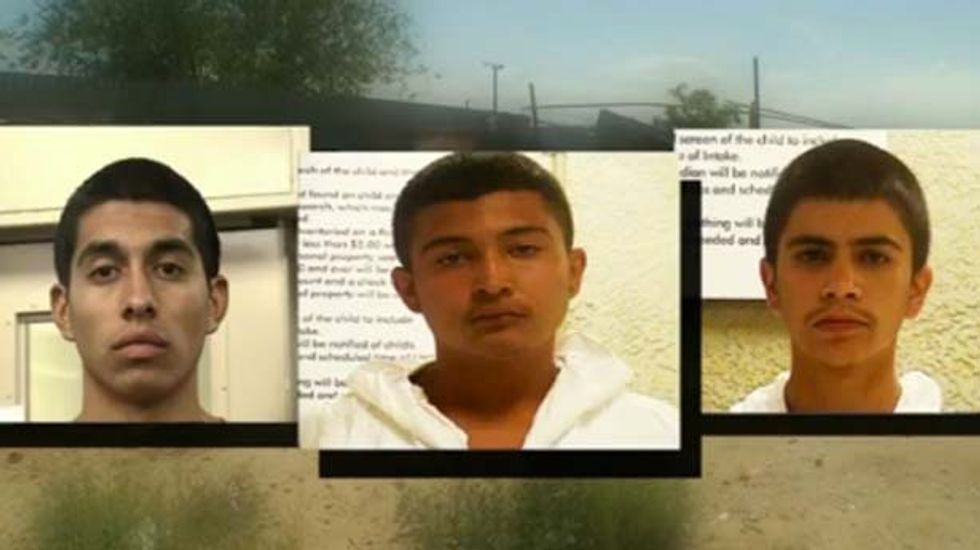 Three Albuquerque teens, who have been arrested for the murder of two homeless men sleeping in a field, have admitted to a series of over 50 random attacks on homeless people over the past two months.

Alex Rios, 18, Nathaniel Carrillo, 16, and Gilbert Tafoya, 15, have all been charged in the murders of two men, beating them so badly police have not been able to confirm their identities, according to KOB4.

According to the complaint, the three teens beat the men with bricks, sticks, and a metal fence pole after coming across them on the way home from a party.

"So violent, I mean I was sick to my stomach," a responding police officer said. "Homicide had a hard time dealing with this. They were there for about eighteen hours putting it together."

Following their arrest the teens admitted to police that they had been randomly attacking homeless people throughout the city, and that they had attacked at least 50 people just in the last couple of months.

On the evening of the deadly attack a third man was beaten but he survived. He told police that he recognized the teens because they had previously beaten his mother who is also homeless.

Victor Prieto, the father of Gilbert Tafoya, said he was in shock after his son confessed to taking part in the murder of two homeless men, adding that Tafoya's family was once homeless too.

Prieto said that when police officers showed up to  talk to his son about the murders, Tafoya knew why they were there.

"As soon as the police officers told us to call the boys out to talk to them, to ask if they'd seen anything, he right away started to throw up," Prieto said.

Homicide detectives called the scene of the crime the most horrifying they had ever seen.

Police have started an outreach program seeking other homeless people who may have been victims of the three young men.

Watch the video below from KOB4: