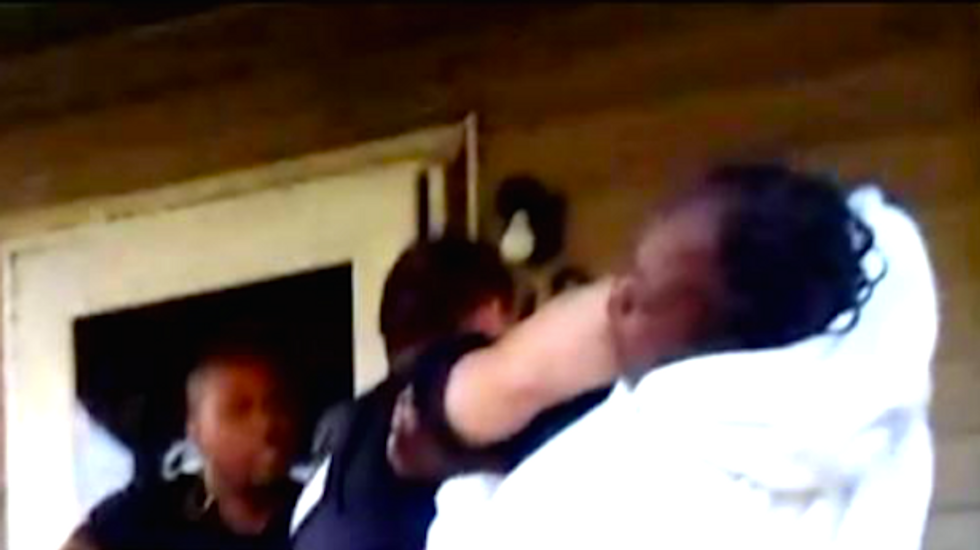 A Virginia family said police harassed them and tried to stop them from filming arrests in front of their home.

Cell phone video recorded last month shows 17-year-old JaQuan Fisher standing on his own front porch as he records the arrest of several people, including his cousin, who yelled, “Start recording.”

Then Petersburg police confronted the teenager, and one officer can be heard ordering him to turn off the video recorder “unless you want me to take your phone from you.”

There is a struggle and the video shuts off, reported WWBT-TV.

“He came off the porch and said, 'You want me to take your phone?'" Fisher said. "I put my phone in my pocket and then when he tried to take my phone, I guess he thought he was going to get my phone and he shoved me. I shoved him back."

Fisher’s sister then started recording another video on her own phone.

"They was trying to grab my son off the porch,” said their mother, Debra Fisher. “I was trying to tell my boyfriend to open the door so we can get in the house.”

A second officer arrived during the struggle, and the family said he began haphazardly spraying mace.

"They maced each other, too,” Debra Fisher said. “He just started mace-ing everywhere.”

A third officer rushed onto the porch and placed Debra Fisher in a chokehold, nearly pulling her backward off the porch.

JaQuan Fisher was charged with two counts of felony assault on law enforcement, but prosecutors dropped one of those charges and reduced the other to a misdemeanor.

The teen pleaded guilty to that charge, and his mother was convicted in a bench trial of obstructing justice.

But the family still doesn’t understand why police came onto their porch in the first place.

"We have a right to do what we want to do with our phone sitting on your porch -- sitting on my porch," Debra Fisher said.

Petersburg police confronted another teen recording video during an April 10 arrest, when they told 17-year-old Devin Thomas to leave a public street.

"Get inside now – inside,” an officer says in that video. “You can record all you want to.”

The video shows officers engaged in violent confrontation with another bystander who was not involved in the original arrest.

"Let's be real clear: You have the absolute right to stand on your front porch and record what's going on in your front yard," said defense attorney Steven Benjamin.

He said the apparent pattern of police officers harassing residents for filming video “erodes the public confidence in the police and public trust in the police.”

"Because an officer decided to prohibit what was the video recording being made on the porch, you then had the police creating a separate encounter that very quickly got out of control, putting the other officers at risk," Benjamin said.

The attorney also questioned the use of a chokehold on Debra Fisher.

"It's a dangerous procedure and it's very far along that continuum of force, that gradual increase of force that officers are allowed to use to protect themselves,” Benjamin said. “It can be very dangerous to hold a person in place like that."

But Petersburg police pointed out in a statement that Debra Fisher had been convicted of obstruction, and the department said no officers were disciplined and no complaints were filed.

Debra Fisher said she may appeal her conviction, and she declined to file a formal complaint because she no longer trusts the police department.

A display set up at the Conservative Political Action Conference offered a performative portrayal of jailed U.S. Capitol rioters.

The booth consists of an unidentified man wearing an orange inmate jumpsuit and a MAGA hat sitting in a mock jail cell and crying, and passersby are offered headphones that play testimony from suspects arrested for various offenses during the Jan. 6 insurrection, according to freelance journalist Laura Jedeed.

Hungarian strongman Viktor Orbán was the toast of the Conservative Political Action Conference (CPAC) this week, but that doesn't mean all conservatives are on board with lionizing him.

Writing on Twitter, American Enterprise Institute fellow Ivana Stradner warned her fellow conservatives about putting Orbán on a pedestal, while highlighting his authoritarian stances on a number of issues.