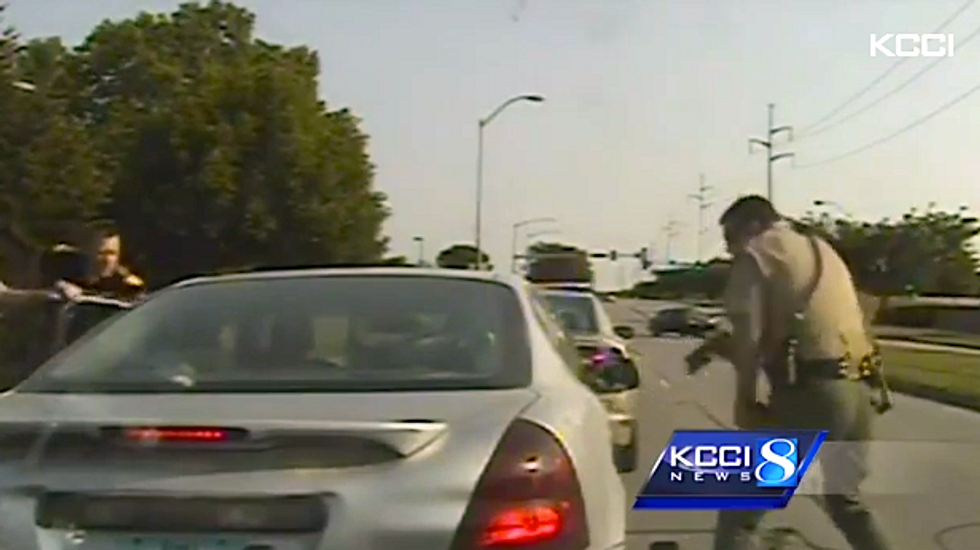 An Iowa sheriff’s deputy accidentally fired his gun into the car of a man who suffered an apparent medical incident while driving.

Another driver called 911 shortly before 6 p.m. Sunday to report a vehicle speeding and swerving all over Highway 141, reported KCCI-TV.

“He's over the yellow line again, going towards the median, and he's over in the center line now and we’re going towards a bridge,” the driver told dispatchers. “Oh, he was swerving towards the bridge and I thought he was going to hit it.”

A Polk County deputy caught up with the erratic vehicle near Grimes, but the driver sped up to 80 mph and crossed the median into oncoming traffic.

"It didn't seem to be someone actually fleeing from an officer or deputy, didn't seem like that type of driving," said Lt. Jana Abens, of the Polk County Sheriff's Office. “At that point both the trooper and the deputy both thought, 'we need to think outside the box here and figure how we can get this vehicle stopped.”

After narrowly missing numerous oncoming vehicles, deputies positioned themselves ahead of and behind the vehicle and brought it to a stop.

Deputies approached the vehicle, which they later determined was driven by 24-year-old Steven Schulte, and found the driver incoherent and staring blankly.

They broke out two windows with batons to gain access to the driver, and Reserve Deputy Troy Cline accidentally fired his weapon when he attempted to reholster the gun.

The gunshot fired into the passenger-side door but did not injure anyone, reported the Des Moines Register.

He won’t be charged in the incident after investigators ruled out drugs and alcohol as contributing factors, but no additional details were released about the medical condition that triggered the pursuit.

The sheriff’s office is reviewing the actions of the reserve deputy, who serves as supplemental support for certified law enforcement officers.

Reserve deputies are permitted to carry firearms if they are approved and certified by the Iowa Law Enforcement Academy.