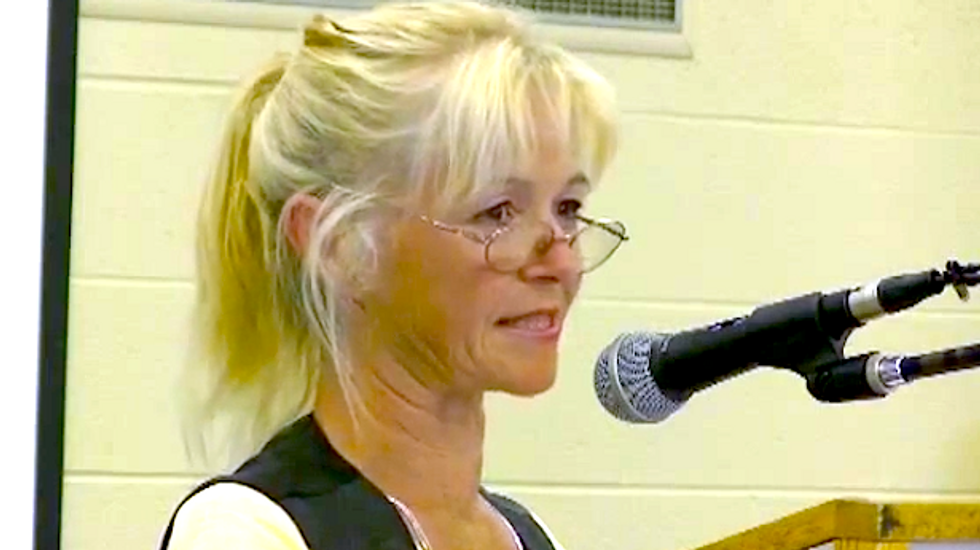 Concerned residents responded to rumors about undocumented immigrant housing in Michigan with conspiracy theories at a community meeting.

The Vassar Concerned Citizens Committee organized an informational meeting Wednesday about a possible plan by Wolverine Human Services to house up to 120 teenage boys from Central America in the eastern Michigan town.

The Gross Pointe Park-based social services agency is negotiating a contract with Heartland Alliance, a Chicago anti-poverty organization, to allow the teens to stay for up to four weeks in Vassar, where they would receive medical care and basic education as their cases are heard in immigration court.

They would then be connected with relatives in the U.S. or returned to their countries.

Protesters carrying Gadsden “Don’t tread on me” flags and placards promoting conspiracy theorist Alex Jones’ InfoWars website gathered outside the event, and some of them took the microphone to share claims circulating on right-wing websites and social media.

“The children that are involved here are only pawns,” said Tamyra Murray, an anti-immigrant activist. “They’re a game to control our nation. It’s an invasion, nothing less than an invasion.”

Murray claimed the surge of immigrant children had been orchestrated by Central and South American governments to undermine the U.S., and an audience member shouted out that these immigrants would one day provide Democratic votes.

“If this program is allowed to proceed, it will never end,” she said. “Government entities, once they create something, they never exterminate it. It’s going to be a perpetual source of income, and for government agencies and committees in the federal government.”

Many of the speakers blasted President Barack Obama, describing him as a criminal or worse.

“The housing of illegal aliens is violating U.S. laws (and) President Obama is failing to uphold the Constitution and laws enacted by Congress,” said Tom Wassa, a Republican candidate for the Michigan House of Representatives. “President Obama would be classified as a domestic terrorist. He is creating an atmosphere of fear and terror.”

A member of the Michigan 3 Percenters, a loosely organized group of gun-rights activists, said she drove 90 miles to express her concerns about the spread of disease across the southern border.

"It's a safety and health concern,” said Shannon Toney, who was wearing a handgun clipped to her belt. “These kids could be very sick without even knowing it.”

"I support a minefield along the border," said Terry Mocny, a Marine Corps veteran who said he supported legal immigration.

He suggested sending the undocumented children to the now-closed Standish Maximum Correctional Facility.

Another man, who claimed he was “allergic to bullsh*t” and walked out on comments from a Wolverine official, wore a surgeon’s mask around his neck to symbolize his concerns about germs.

"I fear within two years of letting these immigrants in, these masks will become standard," said Tom Ratcliff, of Kingston, who volunteered to drive busloads of immigrant children back to the border.

Yet another speaker insisted he didn’t hate children.