Why Joe Biden thanked LGBT people for saving straight people, and I do too! 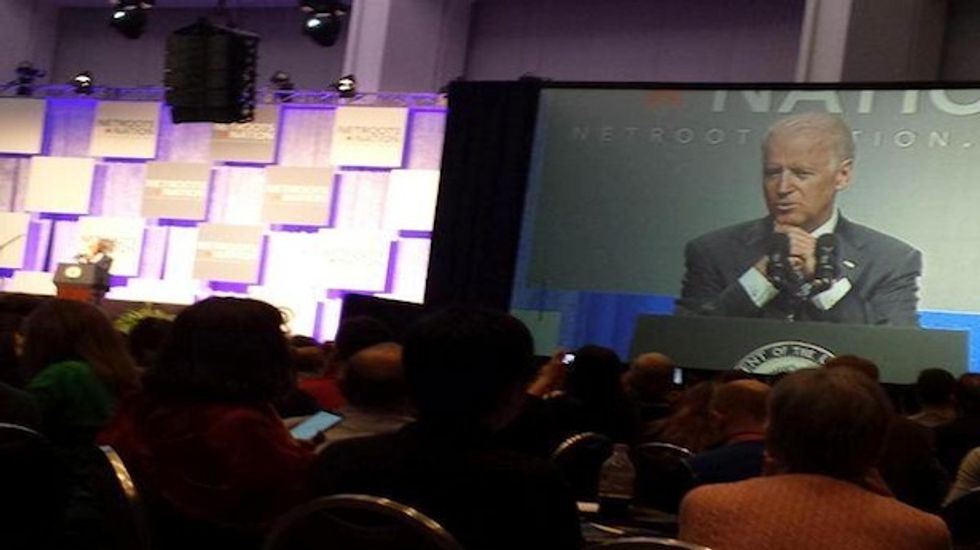 Vice-President Biden may get credited with pushing President Obama out of the closet on the issue of marriage equality. But Joe's the one who's grateful to the LGBT community, as I learned while attending a speech he delivered Thursday in Detroit at Netroots Nation (where I snapped the photo of Biden coyly voguing, featured above).

Before Joe Biden outed the Obama administration, the President had seemed bi-curious at best, when it came to LGBT civil rights. Sure, he dabbled a little, coming out against DOMA here and Don't Ask Don't Tell there. He grappled with his position on marriage equality, which seemed fluid, but his commitment to it seemed more like a phase he would grow out of.  After all, lots of people experiment and explore their position on sexuality during their presidential years.

But that all changed after Joe Biden came out for marriage equality, on national TV no less, in 2012. In case you missed it, during an appearance on Meet The Press, Biden said,

The good news is that as more and more Americans come to understand what this is all about is a simple proposition. Who do you love? Who do you love and will you be loyal to the person you love? And that’s what people are finding out what all marriages at their root are about. Whether they are marriages of lesbians or gay men or heterosexuals.

With his typical inability to control himself from saying something for which he'd surely get into trouble, Biden became the highest-ranking American official to endorse same-sex marriage. And Biden's statements are considered the catalyst for Obama's own embrace of marriage equality. Arshad Hasan, the executive director of ProgressNow introduced Biden at Netroots Nation by saying,  "Those of us who hold marriage equality near and dear to our hearts and our homes, we know Joe Biden spoke first... I give Joe Biden credit for changing the dialogue in the White House."

But Joe revealed that he was grateful to the LGBT community:

I didn't free them. They freed us... It used to be that the vast majority of the American people who were not at all homophobic felt intimidated if they spoke up, felt intimidated if they were in a circumstance where someone made fun of, or was demeaning to, someone who was part of the [LGBT] community… so many decent straight people who were just as afraid to speak out now have been given their voice by the gay community.

The brave LGBT men and women who fought for their rights were fighting for straight rights too, even if they didn't know it.

As a straight person, I too, thank those who created a safe space for straights to feel comfortable with their own non-rejection of homosexuality. I remember the pain of not being able to express my true "straight but not narrow" identity: hiding my Indigo Girls CDs when I was in high school, changing the channel if anyone came into room while I watched "Will & Grace," expressing contempt for antiquing and interior decorating. But now, we are silent no more. Now, we can lift our heads high and finally say, "we're here, we're not queer, but we're totally fine with it if you are, get used to it."