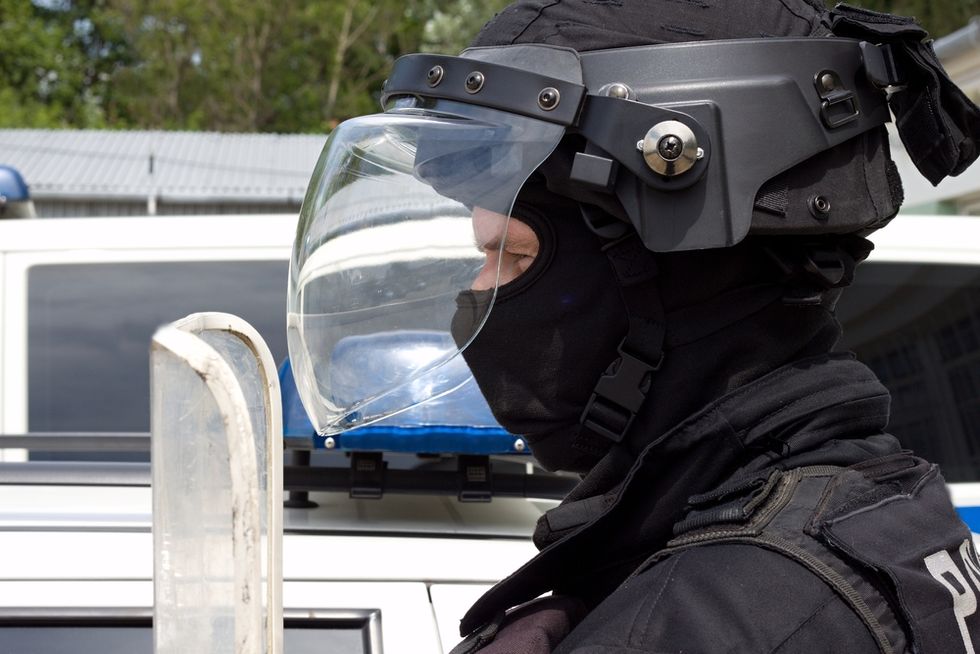 Police in the embattled town of Ferguson, Missouri shot down another man in the early hours of Wednesday morning, roughly a mile from the site of the town's protests against the slaying of unarmed black teen Michael Brown on Saturday.

MSNBC reported that around 1:00 a.m., St. Louis County Police responded to a report of gunshots and of five or six African-American men toting shotguns and wearing ski masks.

Officers told MSNBC that when they arrived on the scene, a group of men there scattered and ran. One of them reportedly pointed a handgun at police, which they said gave them no option other than to shoot. The suspect was injured and taken to an area hospital in police custody.

Police also said that an area woman was injured in a drive-by shooting earlier in the night, but that neither shooting appeared to be related to the protests that took place in Ferguson on Tuesday.

On Saturday, a Ferguson police officer shot and killed unarmed black teen Michael Brown. Witness and police accounts of the killing differ sharply. Police claim that Brown attacked a police officer, who fired on him in self-defense.

Witnesses who were on the scene on Saturday claim that Brown and a friend were being harassed by a police officer who singled out the boys and attacked them.

Since Saturday, the town has been riven, with protesters claiming that the lives of African-Americans matter little to the police, who behave more and more like an armed gang and less like protectors of the public peace. Police have responded aggressively to the street demonstrations, firing tear gas, wooden projectiles and rubber bullets into the crowds to force them to disperse.

Now, state officials are reportedly mulling whether or not to call in the National Guard to maintain the peace. The police force has refused to release the name of the officer who killed Brown, claiming that to do so would endanger his safety.

The Department of Justice is currently investigating the Brown case, with a DoJ representative telling NBC that the FBI, federal civil rights attorneys and a team from the Community Relations Service are watching the situation in Ferguson carefully.

[image of cop in riot gear via Shutterstock.com]