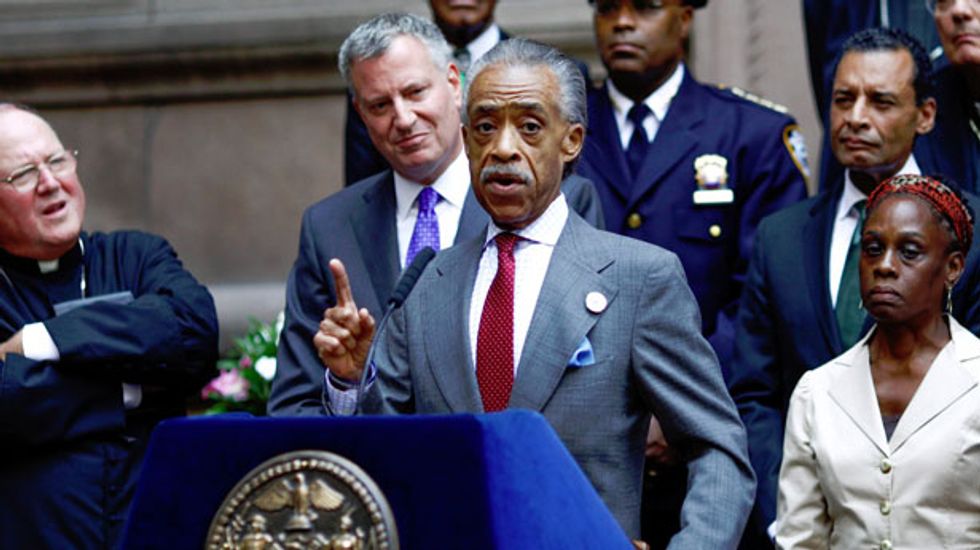 NEW YORK (Reuters) - It was not the first time the Reverend Al Sharpton made his way to City Hall in a fiery mood to scold a mayor about New York City police officers killing an unarmed black man.

Still, something about Sharpton's appearance with Mayor Bill de Blasio and Police Commissioner Bill Bratton late last month left some observers, and possibly even some of the participants, feeling off-kilter.

The event, called to discuss the death of a Staten Island man put in a choke hold by police as they arrested him for selling untaxed cigarettes, highlighted the adjustments that de Blasio and Sharpton, who has often been kept at arm's length at City Hall, are having to make since the liberal mayor's election.

It is an open question whether Sharpton, for years a polarizing figure who many saw as inflammatory, wields more power under de Blasio, the city's most progressive mayor in a generation, than he did with the more conservative Rudy Giuliani and Michael Bloomberg.

But there can be little doubt that Sharpton's ideas about police reform carry more heft at the heart of de Blasio's City Hall, just as they appear to be gaining traction in the rest of country.

"The mayor is more deliberate and more contemplative than they're probably used to," Sharpton said in a recent interview, referring to the perception of some New Yorkers that de Blasio's softer approach is a sign of weakness.

"Giuliani was more confrontational. Bloomberg was more abrupt. And this mayor, he reminds me in some way of Obama: he listens," he said.

Over the years, Sharpton has achieved national stature as a civil rights leader. He will deliver the eulogy on Monday at the funeral of Michael Brown, the unarmed black teen shot dead by a police officer in Ferguson, Missouri. The incident triggered more than a week of angry protests and violent confrontations that have made international news.

But a quarter-century ago, Sharpton was a firebrand shouting in the streets outside City Hall, giving voice to black and Latino New Yorkers who often felt ignored in their grievances against the police. He infuriated critics, not least the police unions, who found his manner self-aggrandizing and divisive.

His arguably most divisive moment came in 1987 over his involvement in the case of Tawana Brawley, an African-American teen-ager who claimed to have been abducted and raped by a group of white men. In a case filled with allegations of racist abuse, Sharpton took up her cause. Months later, a New York state grand jury found that the entire story was fabricated by the teen.

Looking back, Sharpton recalls what motivated him.

"I just got up every morning ready for a fight," he said, sitting in his corner office near Times Square. "It was easy - nothing to figure out."

Now, at 59, the civil rights activist has evolved into a gray-haired elder, a role that afforded him the second-best seat in the room during the recent roundtable, alongside a mayor with whom he has been friendly for years.

Absent an obvious foil, Sharpton now must determine how to adjust the adversarial tactics that had served him in the past.

"Al Sharpton's values have been institutionalized by the mayor and the police commissioner," Bruce Berg, a political sciences professor at Fordham University, said.

De Blasio, for his part, has had to figure out how to adapt his unfettered campaign rhetoric against the police's use of stop-and-frisk tactics, seen as unfair harassment of young black men. With restraints of office, the mayor cannot alienate the force he now commands.

In a propulsive voice honed in the pulpit, Sharpton decried the "broken windows" philosophy of policing espoused by Bratton, which holds that going after petty infractions like turnstile-jumping in subway stations or selling loose cigarettes can keep more serious crime at bay.

Sharpton told the mayor, seated to his immediate right, and Bratton that he would become their "worst enemy" if the police was not reformed, as the pair listened with gnomic expressions.

He then invoked de Blasio's biracial son, Dante, saying the teenager would be "a candidate" for a police frisking if he was not the mayor's son - a point that de Blasio himself made while campaigning last year.

There was uproar, at least in some corners. The New York Post slapped it on the next day's front page under the headline "Who's The Boss!" and witheringly calling Sharpton the self-appointed police commissioner.

De Blasio said he was not afraid of strong opinions. "That is part of what the democratic process is about," he said after Sharpton had spoken. "It should never be feared, it should never be held back."

Sharpton is dismissive of the commotion.

"Nobody says that what I said was wrong," he said. "They're just saying I shouldn't have said it."

Every recent New York mayor has had an inevitable and telling encounter with Sharpton.

Giuliani, who was mayor when police killed Amadou Diallo, an unarmed black man, in a hail of 41 bullets in 1999, would not even have Sharpton inside City Hall. Indeed, Giuliani called de Blasio's invite a "big mistake" in a recent radio interview.

By 2006, when Sean Bell, another unarmed black man, was shot at by police 50 times hours before his wedding, Bloomberg was mayor. In response to Bell's death, Bloomberg held a City Hall roundtable with community leaders that was remarkably similar to de Blasio's.

But at no point was Sharpton given free rein to tell Bloomberg what he thought while television cameras rolled: that happened behind closed doors, or on the steps of City Hall with Bloomberg nowhere in the frame.

Still, Sharpton says he has no intention of giving de Blasio an easy ride.

"While he is mastering his job, don't blame me that 30 years ago I figured out mine," he said. "I think that the only way that he's undercut is if he doesn't do what he says."

Donald Trump didn’t just conspire to overturn the election. He ripped off his own supporters while doing it.

Treason, it turns out, is a lucrative endeavor.