AZ gov candidate: I practice shooting with my eyes closed in case I'm 'attacked in the night' 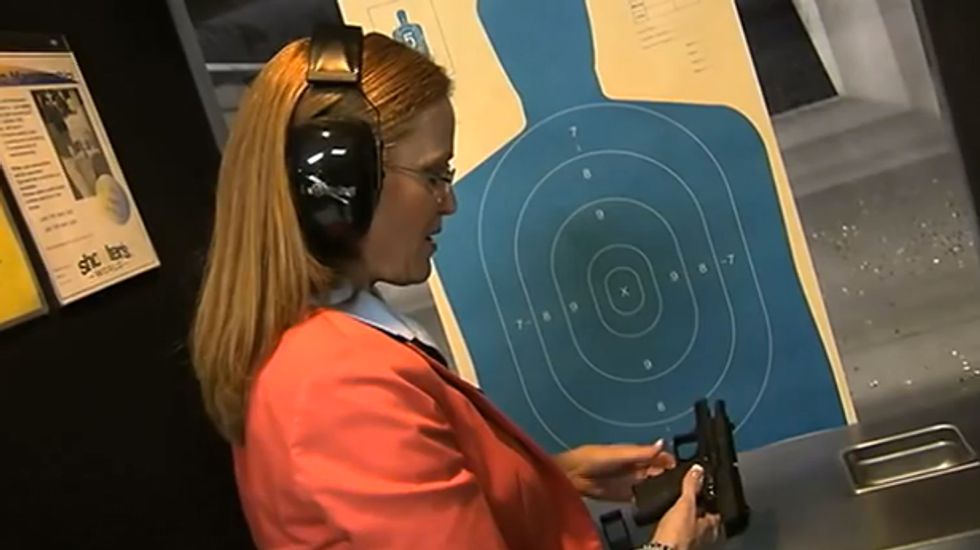 A woman seeking the GOP nomination for governor of Arizona recently explained to a local reporter that she likes to practice shooting with her eyes closed because "... chances are, if somebody attacks you, it's going to be in the night."

Christine Jones, the former counsel for domain registration company godaddy.com, has pumped $2 million of her personal fortune into her campaign to succeed Gov. Jan Brewer. She recently met with a FOX10 reporter at a local gun range, which she described as one of her favorite hangouts after work.

After displaying her 9mm hand gun, Jones explained to the reporter her feeling about guns and shooting, saying, " The Second Amendment gave us the first. It gave you your job."

After explaining that she is "cutting a lot of checks" to her campaign, Jones demonstrated her shooting prowess , described as her "own way of shooting."

Asked why, Jones replied, "Because chances are, if somebody attacks you, it's going to be in the night."

After shooting multiple times at target, Jones managed to hit the target once in shoulder, before admitting "That's a problem at thirty yards."

Previously Jones was notable on the campaign trail  for claiming in 2013 to have served in the U.S. Air Force when the closest she came to the Air Force was  as a cadet in the Air Force ROTC at the University of Oklahoma.

Jones spokesperson said that she had intended on enlisting but her poor eyesight kept her out.

Watch the video below from Fox10 Arizona: