CNN's Don Lemon pushed around by St. Louis cops: 'Now you see why people are so upset' 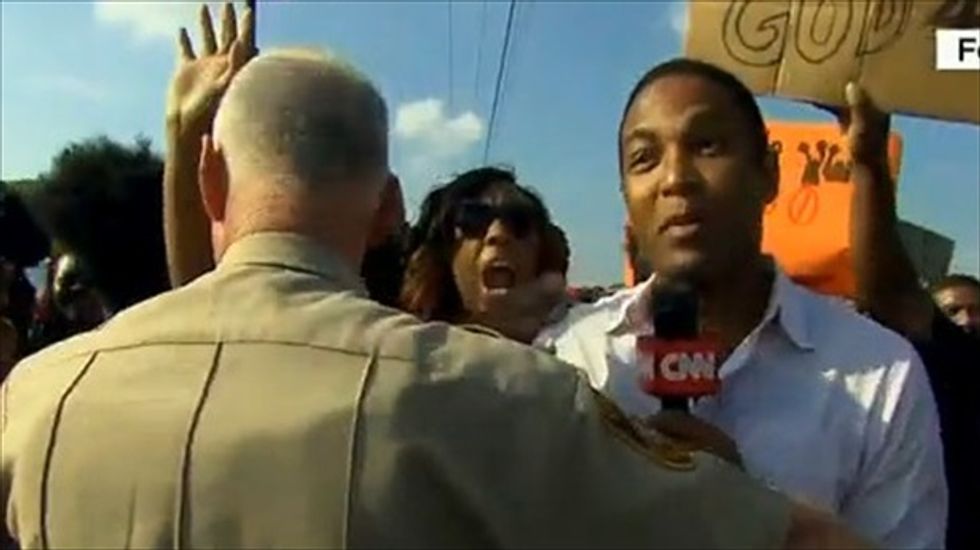 CNN host Don Lemon criticized St. Louis County police on Monday for both physically shoving him during a live broadcast and changing their policies regarding demonstrations in Ferguson, Missouri in a seemingly arbitrary fashion.

Lemon was filing a live report on The Situation Room when one officer tried to push him back. Lemon said on air that he was not resisting the officer, but was being pushed in the other direction by demonstrators criticizing authorities' response to the fatal shooting of 18-year-old Michael Brown last week.

After a few seconds, the officer -- who was one of several not wearing a badge or identification -- can be seen moving away from Lemon.

"Now you see why people are so upset here," Lemon said after breaking away from the officer. "Because we have been here all day. They moved us here and told us this is our location. And they're doing the same thing to the people. So, we're on national television. Imagine what they're doing [to] people when you don't see on national television, the ones who don't have a voice like we do."

Later, Lemon can be heard off-screen asking an unidentified officer why the protesters were being moved. The officer replied that the crowd was being moved off of the streets and into an empty parking lot, citing "traffic concerns."

"But you understand everybody has been standing here all day," Lemon responded. The officer did not continue the discussion.

Lemon later said there were not any demonstrators in the street until they were asked to move by police.

"So I think from my perspective here, the police actually created the traffic situation and the situation that's going on," Talking Points Memo quoted him as saying.

Local authorities have clashed with members of the press during the demonstrations in Ferguson, with reporters being arrested and a news crew being hit with tear gas and rubber bullets. The Huffington Post reported on Monday that Getty photographer Scott Olson was also arrested.

Watch footage from Lemon's encounter with local police, as aired on CNN, below.