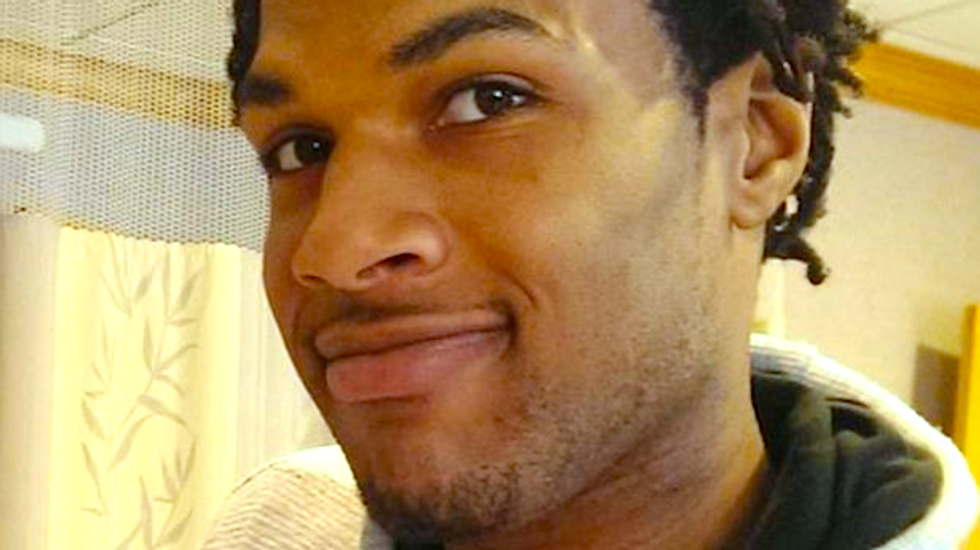 Police fatally shot a man carrying an air rifle at an Ohio Walmart earlier this week.

Another customer called 911 to report 22-year-old John Crawford waving what appeared to be an AR-15 at children and others at the Beavercreek retailer.

The mother of Crawford’s children said she was speaking to him by cell phone when he was confronted by police in the store.

“He said he was at the video games playing videos, and he went over there by the toy section where the toy guns were,” said LeeCee Johnson. “The next thing I know, he said, ‘It’s not real,’ and the police start shooting, and they said ‘Get on the ground,’ but he was already on the ground because they had shot him.”

“I could hear him just crying and screaming,” Johnson said. “I feel like they shot him down like he was not even human.”

Ohio’s attorney general, who was asked by Beavercreek police to investigate the case, confirmed Crawford was holding a MK-177 (.177 caliber) BB/Pellet Rifle when he was shot to death.

The former Marine who called police said Crawford looked to be attempting to load the black air rifle and ignored police commands to drop the weapon.

“He looked like he was going to go violently,” said Ronald Ritchie. “If he would have dropped the weapon, he could have came out with his life, but unfortunately, he didn’t.”

“The officers gave verbal commands to the subject to drop the weapon,” Evers said in a statement. “The subject … was shot after failing to comply with the officers’ commands. The quick response of officers was instrumental in containing this situation and minimizing the risk to customers.”

The attorney general’s office will hand over the investigation once it’s completed to the Greene County prosecutor, who will then decide whether to present the case to a grand jury.

Another customer, 37-year-old Angela Williams, suffered a medical emergency during the incident and died a short time later at an area hospital.

The co-hosts of "The View" shredded Gov. Ron DeSantis (R-FL) during their Wednesday show as he is blocking state universities from teaching anything involving people of color or diversity. His methodology is that because it will be illegal to teach classes like African American history and other topics, it would be useless to get a degree in those studies.

Two Memphis officers charged with murder in the fatal beating of Tyre Nichols have received reprimands in connection with forcible arrests in the past, according to a new report. Tadarrius Bean, Demetrius Haley, Emmitt Martin III, Desmond Mills Jr. and Justin Smith were all fired and charged with a slew of felonies — including second-degree murder — following the Jan. 7 traffic stop that resulted in Nichols’ death. They’re accused of beating, pepper-spraying and tasing Nichols after they pulled him over on suspicion of reckless driving. Nichols died at a hospital three days later. He was 29. A...