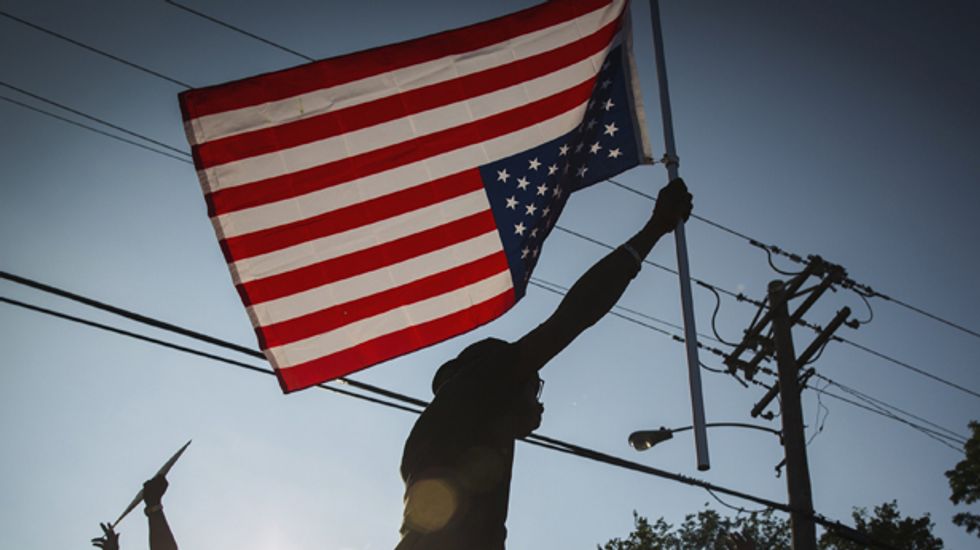 Demonstrators march down West Florissant with a U.S. flag during a peaceful march in reaction to the shooting of Michael Brown near Ferguson, Missouri August 18, 2014. REUTERS/Lucas Jackson

While the violence that has erupted in Ferguson, Missouri, over the past few weeks appears to be subsiding, the discussion over the problems faced by those protesting in the area has not. For a historian of the 1960s, it is surprising and even alarming to see how much of this conversation has taken place before.

The images emerging from Ferguson of heavily armed white police forces confronting African-American protesters, has drawn many comparisons between the unrest in Missouri and the civil rights era. But commentators such as journalist Jon Friedman have argued that this comparison “reeks of ignorance and exploitation”.

Ferguson is certainly not Selma, Birmingham, Watts, or Newark. But even those who are uncomfortable with the comparison have to admit, there are striking similarities. Ironically, it is often in the rhetoric of these same conservative commentators that the ghost of America’s racial past is most visible.

James Knowles, the mayor of Ferguson, is a particularly clear example. Claiming in one television interview that the violence in his jurisdiction was emerging from ‘a very small number of protestors who have come from outside of our community’, Knowles has consistently denied that the unrest in Ferguson had any local support.

In doing so, Knowles follows a familiar path of white officialdom. Those in authority have long preferred to blame violence on a militant and un-American minority rather than admit that large groups of their constituents might hold legitimate grievances. Indeed, the mayor’s comments are eerily similar to those made by Southern segregationists in the 1960s.

Mayor Allen Thompson of Jackson, Mississippi, for example, blamed “outside agitators” for stirring up trouble and refused to change racist policies that he claimed enjoyed “tremendous underground support from Negroes” in the city.

Even if it were true that the unrest in Ferguson has been brought in from outside the town – and it is not – Knowles' response is akin to standing in the eye of a tornado and declaring that everything will be fine once this “outside” wind leaves town.

Wherever the protesters were coming from, they are calling for a redress of genuine grievances. As Martin Luther King Jr. wrote in 1963: “Never again can we afford to live with the narrow, provincial ‘outside agitator’ idea. Anyone who lives inside the United States can never be considered an outsider anywhere within its bounds.”

This is about more than attributing blame for violence, though. An outsider rhetoric was pushed from some quarters during the 1964 Harlem riots and then, as now, it served to undermine the grievances being fought. As Lez Edmond reported in his coverage of the 1964 unrest: to employ outside agitator rhetoric “is to imply that the [local] black community is neither capable nor has the desire to do anything like this”.

Knowles did just that in his now-infamous interview, claiming that “there is not a racial divide in the city of Ferguson” and that his view on the matter represented the perspective of all residents.

When hearing his words, some will be reminded of Governor Edmund Brown, who claimed in 1965, just after some of the largest race riots in American history, that “California is a state where there is no racial discrimination”.

Although many in the media continue to address how the grievances of Ferguson residents are linked to widespread discrimination against America’s minorities, denial is a constant feature of conservative discussion.

Take Rich Lowry, the editor of the conservative publication National Review, for example. Reflecting on the incident that sparked the tension in Ferguson, Lowry dismisses the idea that the actions of police officer Darren Wilson were symptomatic of institutionalised police brutality. “Even if Officer Wilson executed Michael Brown in cold blood,” he writes, “he would be one murderously bad cop, not an indictment of the entire American system of justice.”

A similar line was taken by Fox news presenter Bill O’Reilly, who felt the need to come back from holiday to inform his audience how furious he was about the way Brown’s death was being reported. Explaining the “Truth of Ferguson”, O'Reilly condemned the “charlatans”, “agitators”, and “race hustlers” in the liberal media for presenting only one side of the story.

O’Reilly’s “truth” included characterising calls for Officer Wilson to be arrested as “lynch-mob justice” and denying that 400 fatal police shootings in 2012 represented anything more than “police efficiency”.

Meanwhile, Matt Wills, Missouri Republican Party executive director, told the conservative Breitbart News that “injecting race into this conversation and into this tragedy, not only is not helpful, but it doesn’t help a continued conversation of justice and peace”.

To deny that the actions of Officer Wilson are part of a wider problem in American law enforcement is misguided, to deny that race plays a part in the outrage after another unarmed black teenager is killed by white law enforcement officers is simply irresponsible. While O’Reilly and others are right to champion a fair and equal presumption of innocence, it is telling when the example he uses to demonstrate the flaws in America’s justice system is the trial of OJ Simpson.

Little, it seems, has changed since the Kerner Commission concluded in 1968 after the 1967 riots that: “slights and indignities are part of the Negro’s daily life, and many of them come from what he now calls "the white press” – a press that repeatedly, if unconsciously, reflects the biases, the paternalism, the indifference of white America".

Polls after riots in Los Angeles in 1965 showed that while black people blamed the unrest on unemployment and poor living conditions, whites tended to blame lawlessness and outside agitators.

In the absence of honest and frank discussion in the intervening five decades this gap remains, with 80% of African Americans in one Pew Research survey feeling that Ferguson raised “important issues about race” compared with just 37% of whites and only 22% of Republicans.

Perhaps more importantly, 47% of the whites surveyed, and 61% of the Republicans, thought that race was “getting more attention than it deserves” in Ferguson coverage compared to just 18% of African Americans.

This disparity is unlikely to change for the better while conservative talking heads keep denying the existence of institutionalised forms of racism in the US. Perhaps conservatives should stop criticising liberals for making lazy comparisons to the civil rights era and instead ask why such comparisons are so easy in the first place. The answer has a lot to do with how the right talks, or doesn’t talk, about race. To quote Bill O’Reilly: “only the truth will overcome the chaos”.

Mark Walmsley receives funding from the School of History at the University of Leeds.