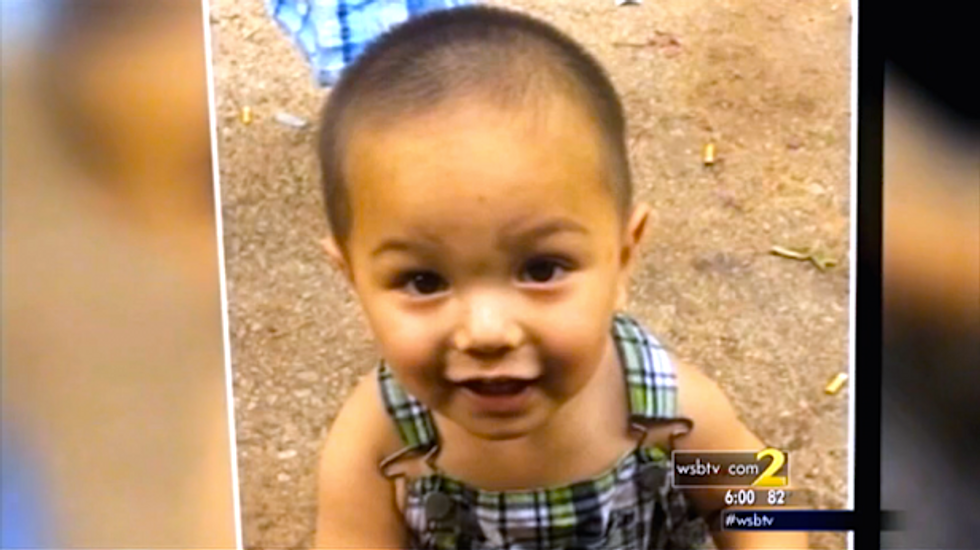 Officials in a Georgia county are refusing to pay medical expenses for a toddler badly injured during a police raid on the home where the boy was staying.

Bounkham Phonesavanh was hospitalized for weeks in a burn unit after a SWAT officer tossed a flash grenade into his crib during a no-knock raid May 28 in Habersham County.

The 19-month-old suffered serious wounds, including a hole in his chest that exposed his ribs, and burns to his face and chest when the grenade detonated just inches away from him as he slept.

The grenades were developed for combat use and are intended to temporarily blind and deafen anyone nearby.

“I heard my baby wailing and asked one of the officers to let me hold him,” the boy’s mother, Alecia Phonesavanh, told Salon. “He screamed at me to sit down and shut up and blocked my view, so I couldn’t see my son. I could see a singed crib, and I could see a pool of blood.”

“The officers yelled at me to calm down and told me my son was fine, that he’d just lost a tooth,” his mother added. “It was only hours later when they finally let us drive to the hospital that we found out Bou Bou was in the intensive burn unit and that he’d been placed into a medically induced coma.”

Officers were executing a search warrant after a confidential informant claimed he bough $50 in drugs from a 20-year-old who lived at the residence, where the boy’s family had been staying since their own house burned down.

Authorities have said they were not aware children were staying at the home, but the Bounkhams said their minivan with car seats and decals depicting the couple and their four children was parked near the door.

Bounkham was released from the hospital in July and returned with his family to Wisconsin, where they had lived before the fire.

"His face still bears scars that are going to take a number of reconstructive surgeries," said family spokesman Marcus Coleman. "We have been informed by the family that every single night, every single night, this child wakes up screaming and holding his face.”

Officials in Habersham County, which conducted the drug raid, have turned down the family’s request to pay for the boy’s medical bills, saying they’re not allowed to help.

"The question before the board was whether it is legally permitted to pay these expenses,” county attorney Donnie Hunt said in a statement. “After consideration of this question following advice of counsel, the board of commissioners has concluded that it would be in violation of the law for it to do so."

But the Phonesavanh family isn’t satisfied with the decision or the explanation, their attorney said.

The attorney said an independent investigation in June found the county used faulty information to obtain the search warrant, and the county continues to examine its handling of the case.

A state senator has introduced legislation to limit the issuing of no-knock warrants in Georgia, although he admits a previous attempt in 2006 failed.

"The public is demanding, black, white, Republican, Democrat, is demanding reform to the use of no knock warrants and that’s what we are going to be fighting for," said state Sen. Vincent Fort (D-Fulton County).