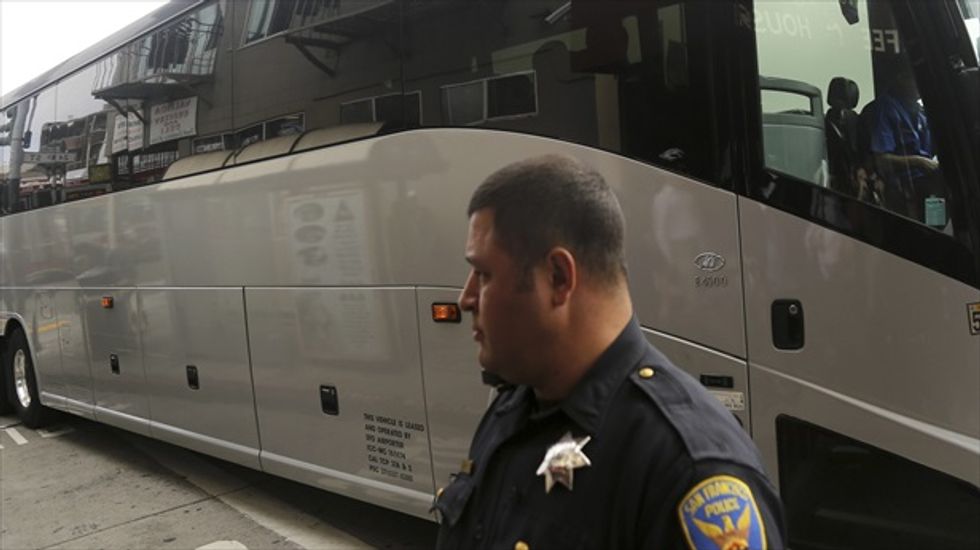 The private buses, which for years have taken tech workers from San Francisco to their offices in Silicon Valley, have in recent months drawn criticism from groups who say that by catering to well-paid professionals, the buses lead to higher rents in diverse, low-income neighborhoods.

Protesters also have said the vehicles get in the way of municipal buses.

Under an 18-month pilot program that launched on Friday, the shuttle services will be allowed to use bus stops at over 100 locations throughout the city and in exchange they will pay at least $3.55 each time they pick up or drop off passengers, officials said.

The program has not completely quieted protests. A group of about two dozen demonstrators gathered in the Mission District on Friday to express continuing anger at the buses, which glided by them with their new, bright green permit placards.

The San Francisco Municipal Transportation Agency (SFMTA) estimates there are 35,000 daily trips made on the shuttles, and that through this program it will raise $3.7 million to cover costs for making sure they run smoothly.

“We're grateful to the SFMTA for taking the lead on the pilot and look forward to working with the city and participating shuttle operators to refine the program,” a Google spokesman said in a statement.

Richard Drury, lead attorney in a lawsuit filed in May against the city and a number of companies involved in the shuttle bus program, said exhaust fumes from the buses are a concern in neighborhoods where they operate.

“The Mission District, a historically Latino area, is ground zero for this program,” Drury said. “One of the main impacts of the program is that it allows high-income people to displace low-income residents in the Mission.”

His group is calling for the city to put more effort into studying effects of the shuttle buses.

“For many years now we’ve had commuter shuttles operating within the city,” said SFMTA spokeswoman Kristen Holland. “They are large charter buses that are regulated as vehicles themselves, outside of our purview. We’re just regulating where they stop.”

[Image: A San Francisco police officer stands in front of a Google commuter bus after clearing demonstrators blocking its path in the Mission District in San Francisco, California August 1, 2014. By Robert Galbraith for Reuters]