Is trigger-happy comedy Let's Be Cops the worst-timed movie ever? 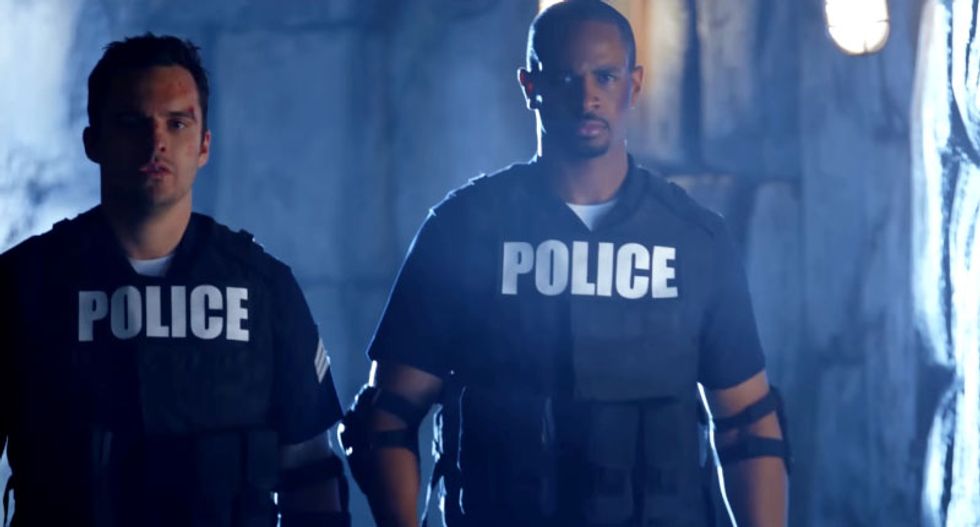 The new comedy Let's Be Cops, in which two dunces exploit the power that comes from wearing police uniforms, includes numerous uncomfortable moments: the bit when one of the heroes does a comedy Asian-American accent, say, or when his girlfriend assumes he is gay because his wrist is limp. When he humiliates a group of suspected criminals by making them perform pelvic thrusts, it's all a shade too Abu Ghraib for comfort. But it's no fault of the film-makers that their movie is opening at a time when the reflex response to the words Let's Be Cops is: "Let's not."

The unarmed African-American teenager Michael Brown was shot dead by a white police officer in Ferguson, Missouri, on 9 August. Though this has nothing to do with Let's Be Cops, some scenes in the film can't help but provoke a shudder: the dumb duo (New Girl's Jake Johnson and Damon Wayans Jr) gawping excitedly at the arsenal of weapons now available to them, or spooking fellow diners when they brandish their guns in a pretend mealtime standoff. When one fake cop spies a gang of crooks and announces, "Those are the bad guys," the distinction is almost touching in its quaintness. One wonders how that line went down inside the many cinemas in Ferguson where the movie began playing only four days after Brown's death.

Let's Be Cops is a contender for the title of Most Unfortunately Timed Movie Release, but there are others. The Watch, about bumbling neighbourhood-watch patrolmen, arrived shortly after the shooting of another black youth, Trayvon Martin, in 2012, and was publicised by a trailer in which Jonah Hill pretended to gun down teens. Martin's killer was George Zimmerman, who happened to be … a neighbourhood-watch coordinator. Recently, the Australian disaster movie Deep Water had its release postponed due to superficial similarities with the case of the missing Malaysia Airlines flight MH370.

It is possible to be too sensitive. The Good Son, scripted by Ian McEwan, never received a UK cinema release because its tale of a malevolent child (played by Macaulay Culkin) was considered too redolent of the murder of James Bulger. Ben Affleck's thriller Gone Baby Gone was shelved in the UK for a year due to its echoes of the disappearance of Madeleine McCann.

The destruction of the World Trade Centre inevitably had ramifications for any movies featuring terrorist plots on US soil (Collateral Damage, Bad Company and Big Trouble among them). The case of Let's Be Cops, though, is slightly different. It doesn't need to be pulled from screens or sent straight to Netflix without passing Go. A more equitable solution, not only for cinema but society in general, would simply be for the police to refrain at their earliest convenience from killing innocent people.

Let's Be Cops is on release in the US and UK now.