John Oliver: News sites are so desperate, their tricks are reaching Scientology-level bullsh*t 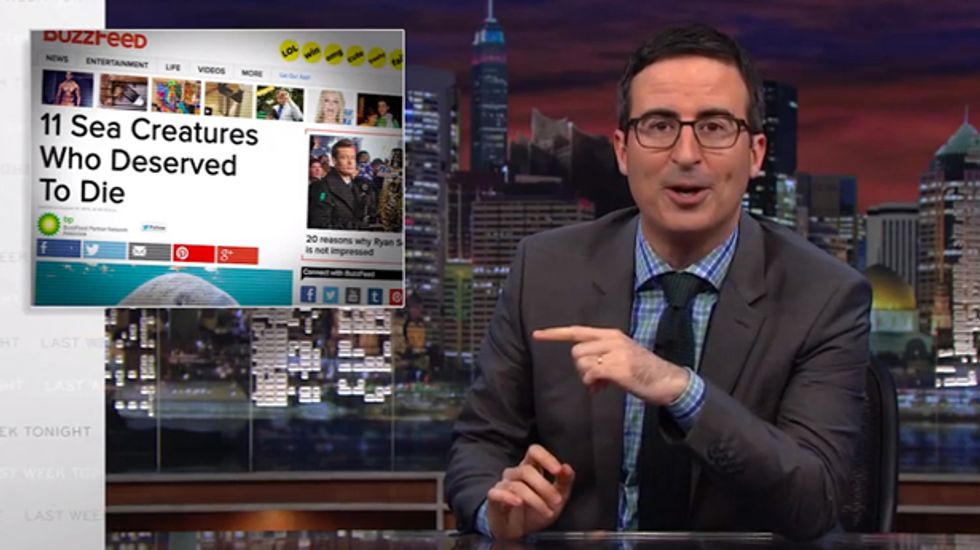 On Sunday's Last Week Tonight, host John Oliver delved into the somewhat inside baseball topic of 'native advertising' -- the insertion of corporate-sponsored  content into news reporting.

Explaining that corporate influence is becoming more and more pervasive in the news delivered online and in print,  Oliver explained that by appearing on  HBO -- which is not supported by advertising dollars --  he is allowed to say, "Cadbury Creme Eggs are filled with dolphin sperm, or that Old Navy clothing makes you look like a tacky murderer, or that Snickers only satisfies you for about eight minutes, then makes you hate yourself for the rest of the day, I can, I can do all of those things."

In a time of sagging profits due to a decline in advertising dollars, Oliver describes news organizations accepting 'sponsored content,'  from corporations, designed to look like news. Oliver described it as breaking down what was known as "the separation between church and state" -- the dividing line between editorial and advertising.

"For the Atlantic, that is ethically compromising," Oliver explained. "For Scientology, that is just plain stupid. They clearly should have gone with a magazine with  better access to their key demographic, such as 'Depressed Aspiring Actor Monthly.' "

After pointing to a sponsored article on energy in the New York Times paid for by Chevron,  Oliver shared a pitch from a New York Times advertising executive "vigorously" defending the practice of merging advertising with editorial,  where she explained, "Good native advertising is not just meant to be trickery, it's meant to be publishers sharing its story-telling tools with marketers."

"Exactly, exactly, " a smirking Oliver added. "It's not trickery, it's 'sharing story-telling tools.' And that's not bullshit, it's repurposed bovine excrement."

Watch the clip below from HBO's Last Week Tonight: