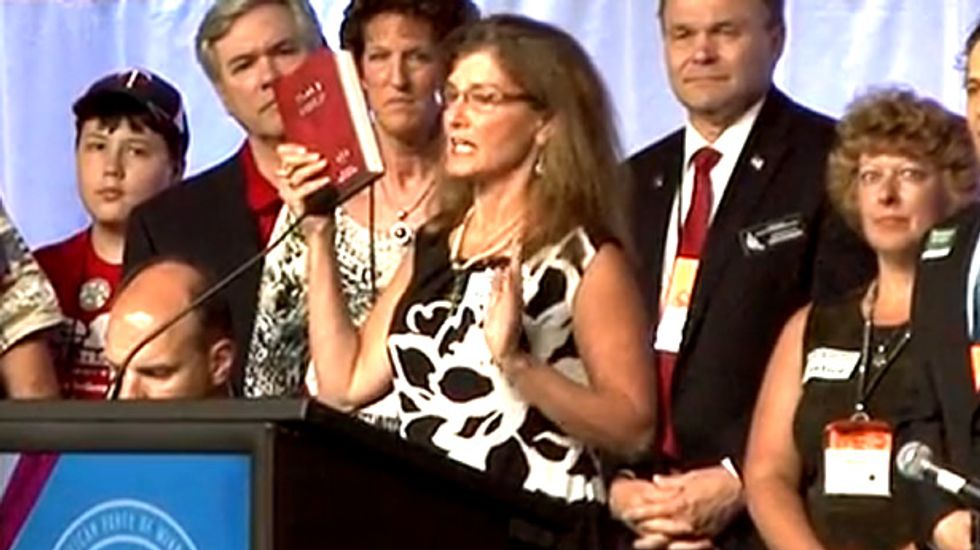 The GOP-endorsed candidate for the Minnesota Supreme Court, awaiting trial on charges of  drunk driving and resisting arrest, was ticketed again last week for violating the terms of her limited driving license agreement.

According to the Star-Tribune, Michelle MacDonald, was cited by police for driving her car outside of the restricted hours permitted following her arrest for driving under the influence.

According to police, an officer encountered McDonald after she flagged him down when her car over-heated and stalled in St. Cloud where she said she was meeting with her campaign manager. The officer noted that McDonald identified herself, writing, "She is running for MN Supreme Court licensed attorney," before adding, "No office in St. Cloud per her. Changed story a couple of time(s) then pleaded with me not to cite her."

When McDonald was arrested in April of 2013 for driving under the influence, she told police she was “a reserve cop” and  “a lawyer,” and  demanded the officers allow her to walk home.  After arguing  and refusing to leave her car,  McDonald was eventually taken into custody after physically resisting the arresting officers.

McDonald then refused to  submit to a blood, urine, or breath test, which was added to the charges against her.

As part of the terms of her release, McDonald is  allowed to drive to work only between the hours of 8AM and 8PM, Monday through Friday. She is not permitted to drive on Saturday or Sunday, and is not allowed  to drive to campaign events.

According to McDonald, the latest incident occurred at 11 AM, which falls within the times when she can drive. McDonald also stated that she was never told why she received the ticket

McDonald, whose nomination to the State Supreme Court was made by GOP leaders  who admitted they were unaware of her legal problems, has also come under fire for promising GOP officials that she would base her opinions on Biblical principles which she feels supersedes the law.