Neil deGrasse Tyson: GMO producers 'ought to be able to make as much money as they can' 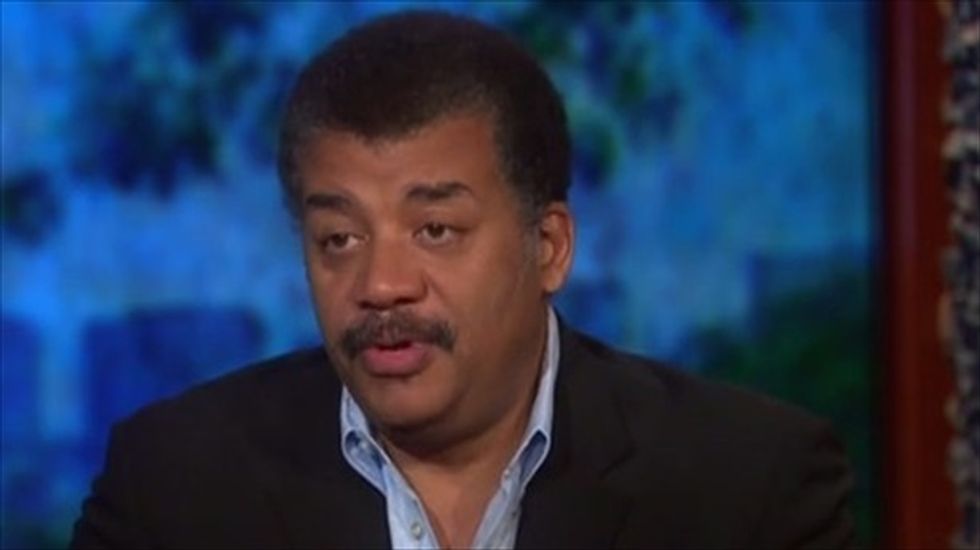 Astrophysicist and Cosmos host Neil deGrasse Tyson took to Facebook this weekend to respond to critics upset with his defense of genetically modified foods in a video that went viral earlier this week.

In the video, Tyson gave an off-the-cuff answer to a question delivered by a French interviewer in French during a post-talk book-signing. Tyson admits that he doesn't speak French and has "no memory of how I figured out that (he) was asking me about GMO's."

Tyson defended his response, writing, "Everything I said is factual, "So there's nothing to disagree with other than whether you should actually "chill out" as I requested of the viewer in my last two words of the clip."

In the clip Tyson explained that wholesale rejection of  GMO food is overblown, saying, “There are no wild, seedless watermelons. There’s no wild cows,” before adding “We are creating and modifying the biology of the world to serve our needs. I don’t have a problem with that, because we’ve been doing that for tens of thousands of years. So chill out.”

In  his Facebook post, Tyson admitted that he was unable to give full nuanced answers to the interviewer in a video clip that only lasted 2 minutes and 20 seconds.

"Had I given a full talk on this subject, or if GMO's were the subject of a sit-down interview, then I would have raised many nuanced points, regarding labeling, patenting, agribusiness, monopolies, etc," he wrote "I've noticed that almost all objections to my comments center on these other issues."

Tyson went on to briefly address each of the topics, saying those who invent patented food strains "ought to be able to make as much money as they can selling it," before proposing a different standard of labeling GMO-foods -- GMO-Agriculture and GMO-Laboratory -- to separate hybrid seeds that have been modified over hundreds of years from laboratory-produced seeds.

Returning to critics of GMO's, Tyson suggested they target their attacks instead of painting the entire industry with a broad brush.

"If your objection to GMOs is the morality of selling non-perennial seed stocks, then focus on that. If your objection to GMOs is the monopolistic conduct of agribusiness, then focus on that. But to paint the entire concept of GMO with these particular issues is to blind yourself to the underlying truth of what humans have been doing -- and will continue to do -- to nature so that it best serves our survival," he advised. "That's what all organisms do when they can, or would do, if they could. Those that didn't, have gone extinct extinct."