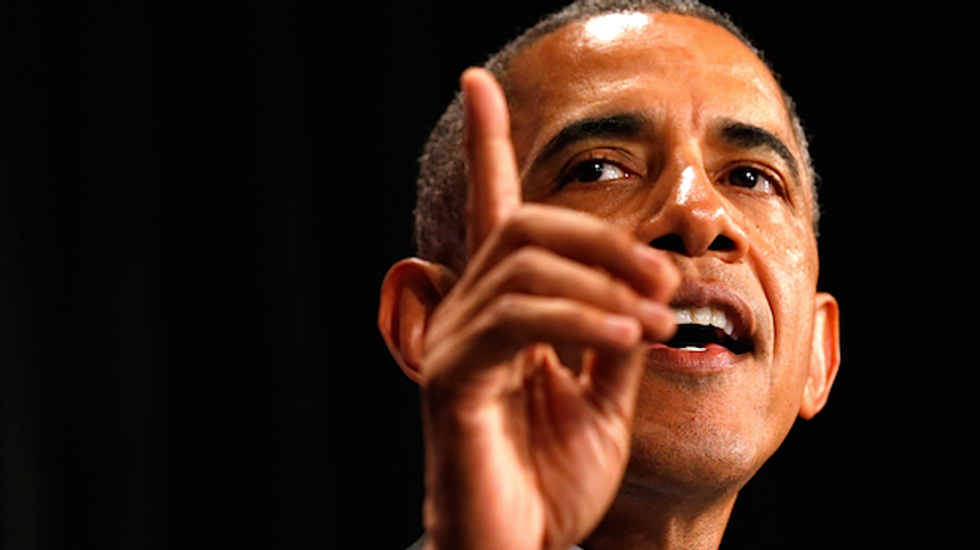 Barack Obama has committed the US to long-term involvement in Iraq, warning that the rapidly evolving crisis in the north would not be solved quickly.

US aircraft have targeted armoured vehicles and militant positions in a second day of strikes against Islamic State forces. A mix of US fighters and drones attacked and destroyed armoured personnel carriers after Yazidi civilians near Sinjar came under attack from the vehicles, US central command said.

A fourth struck another armoured personnel carrier, also in the Sinjar area.

Alongside this, the US-led air campaign to deliver relief to civilians fleeing Isis continued with a third drop of supplies taking place on Saturday night. The US military said the latest air drop involved planes from multiple air bases and included one C-17 and two C-130 cargo planes supported by fighter planes. The aircraft delivered 72 bundles of supplies, including more than 3,800 gallons of water and more than 16,000 packaged meals.

Conceding that the advance of the Islamic State (formerly Isis) forces had been swifter than anticipated – details emerged on Saturday of the jihadists opening another front as they crossed into Lebanon from Syria – the US president accepted there was no quick fix.

The archbishop of Irbil's Chaldean Catholics told the Observer fewer than 40 Christians remained in north-western Iraq after a jihadist rampage that has forced thousands to flee from Mosul and the Nineveh plains into Irbil in the Kurdish north.

Archbishop Bashar Warda said: "We did not expect that one day Mosul would be without Christians and that the Nineveh plains would be emptied of minorities," referring to the stretch of land surrounding Mosul that had been hailed throughout the ages as a cradle of civilisation. "Trust is broken between the communities. Especially with the Arabs. For 2,000 years, all these minorities had lived together."

After taking in up to 1.2 million refugees since mid-June, the Kurds of northern Iraq are urging Obama not to let up in air strikes against Isis, which on Friday was only 50km from Irbil and advancing east towards the Kurdish capital. At least four US air strikes appear to have slowed the momentum of the jihadists, Kurdish peshmerga forces said on Saturday. Officials in Irbil, including Iraq's former foreign minister Hoshyer Zebari, a Kurd who quit his national post in June, urged Obama to continue the strikes. He described the attacks as "a critical decision for Kurdistan, Iraq, and the entire region ... intended to degrade the terrorists' capabilities and achieve strategic gains that have been very effective".

Obama admitted that rebuilding the Iraqi military, fostering trust among Sunnis and negating the threat from jihadists would be a long-term project. He added: "I don't think we're going to solve this problem in weeks. This is going to take some time."

On Friday he sanctioned air strikes against Isis fighters that destroyed arms and equipment. The military action came less than three years after the last contingent of US troops exited the country.

Meanwhile, British military aircraft joined the US in dropping food, water and tents to thousands of displaced Iraqis hiding in mountains as Obama revealed that plans were under way to create a "safe corridor" for up to 40,000 civilians – mostly Kurds of the Yazidi faith – who are besieged on Mount Sinjar on the western edge of Kurdistan's border with the rest of Iraq. However, he said rescuing the Yazidis might prove fraught. "Moving them is not simple in this security environment," Obama said.

Speaking shortly before leaving for his summer holiday, he said humanitarian assistance including a repeat of airdrops of food and water would continue.

In London the government's Cobra committee met again to assess the latest developments in Iraq, discussions that ratified the decision for British aircraft to begin aid drops immediately.

The C-130 transport aircraft flew from RAF Brize Norton to deliver aid, with government sources suggesting a repeat of the airdrops could follow on Sunday. It followed a second US airdrop of food and water to Iraqis stranded on Mount Sinjar.

Meanwhile, the former foreign secretary, David Miliband, speaking in the Observer, acknowledged that the 2003 invasion of Iraq had contributed to the country's current disintegration and mounting crisis at the hands of Islamist militants.

Miliband, expressing fresh regret over Britain's involvement in the war, admitted that the outcome of the war in Iraq "induces a high degree of humility".

"It's clearly the case that the invasion of Iraq, or more importantly what happened afterwards, is a significant factor in understanding the current situation in the country," said Miliband, during a wide-ranging interview in New York.

The remarks on the crisis by Miliband, now the president and chief executive of the International Rescue Committee, a humanitarian charity, contrast with those offered by Tony Blair, his political mentor, who has strongly rejected claims that the 2003 US-UK invasion is to blame for the terrorism gripping Iraq.

Asked whether the chaos that it had unleashed made him regret supporting the war as a minister in Blair's government, Miliband said: "I regret it because I made a decision on the basis of upholding the norms in respect to weapons of mass destruction, and there were none."

The phenomenon of Isis and its speed of advance shows little sign of abating as Lebanese security sources indicated that Islamist militants had crossed into the country from Syria, triggering a battle with Lebanese villagers who forced them back across the border. It was not immediately clear if there were any casualties in the incident, near the Lebanese town of Rashaya, some 60 miles south of the town of Arsal.

Britain has so far pledged £8m in aid to those caught up in the advance of Isis in northern Iraq. This includes £2m of emergency humanitarian supplies for 75,000 people, including aid that can be airdropped to help those trapped on Sinjar as quickly as possible.

Supplies will include reusable filtration containers filled with clean water, tents, and solar lights that can also recharge mobile phones.