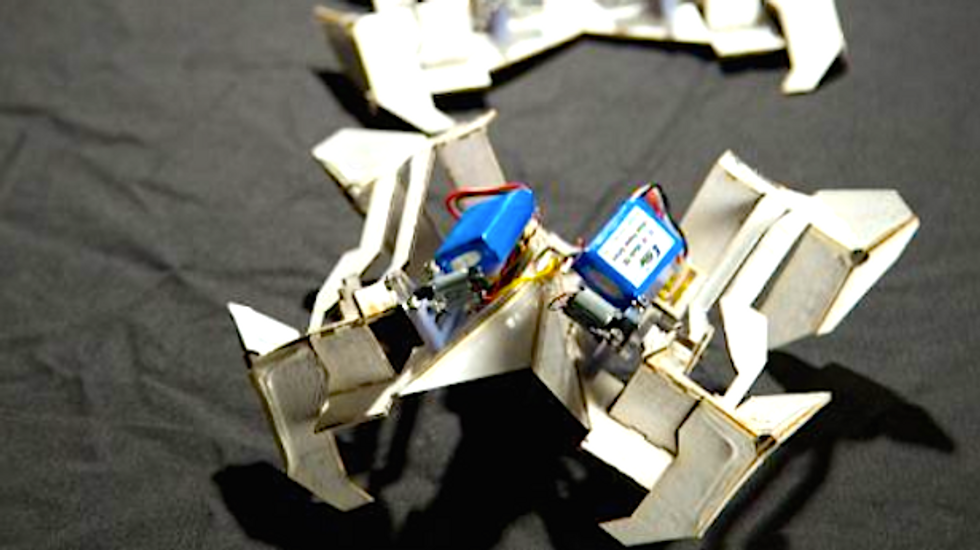 It starts out laying flat, like a sheet of paper. Then it springs up, almost lifelike, and folds into moveable parts much like origami art. And then it crawls away.

This new kind of robot could someday be used in space exploration, to slide into collapse sites to aid search and rescue, or to speed up manufacturing on assembly lines, experts said Thursday.

While this particular machine's march to the world market is still years away, the report in the journal Science said the latest advances open the way to a new frontier in personalized robotics.

Not only is the material cheap -- it cost just $100 -- it could be easily reprogrammed from one task to another, said Sam Felton, a researcher at Harvard University's Wyss Institute for Biologically Inspired Engineering and School of Engineering and Applied Sciences.

"In the same way that if you have a Word document and you want to change few words, you just reprint it at your home computer, you could take a robot's digital plan, change a few things and reprint it," Felton told reporters.

The thin robot is built of layers, including paper, a middle layer of copper etched into a network of electrical leads, and an outer layer of shape-memory polymer that folds when heated.

Once the batteries and motor are activated, the robot folds itself much like a child's Transformer toy, and scuttles away like a crab.

Felton said the total start-up costs for equipment used to make the robot were around $11,000.

The origami machine itself cost $80 for batteries and motor, and $20 for materials.

Other potential uses could include self-assembling furniture, or even shelters that build themselves in disaster zones.

"The exciting thing here is that you create this device that has computation embedded in the flat, printed version," explained Daniela Rus, professor of electrical engineering and computer science at the Massachusetts Institute of Technology (MIT).

"And when these devices lift up from the ground into the third dimension, they do it in a thoughtful way."

The team hopes that commercial uses for the robots will grow in the years to come. In the meantime, its early tasks and functions may be incremental in nature.

"Since we are an academic lab, we try and come up with the most interesting and challenging problems, not necessarily the most practical," said Felton.

"In space, maybe it would be too hard to build a completely self-folding satellite but maybe you would just have the solar panels deploy using shape memory materials, and that would be a very easy and short-term addition."

The research was funded by the National Science Foundation, the Wyss Institute for Biologically Inspired Research at Harvard, and the Air Force Office of Scientific Research.

The researchers plan to present their work at the Sixth International Meeting on Origami in Science, Mathematics and Education in Tokyo from August 10-13.