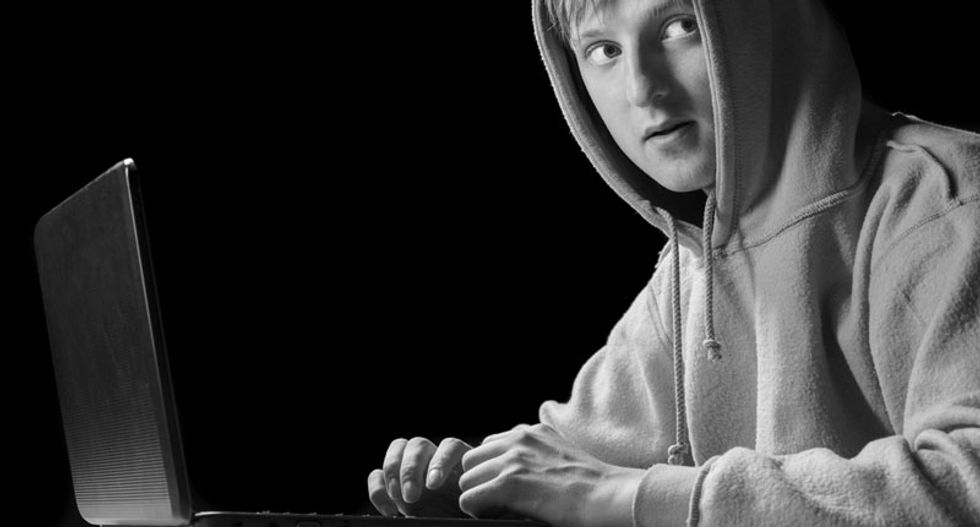 hacker. Young man with laptop is looking back on Shuttertsock

A 16-year-old Utah teen has been taken into custody by Saratoga Springs police and the FBI in connection with making a bomb threat against a high school he formerly attended.

The teen, whose name has not yet been released, is also accused of threatening to shoot first responders, as well as demanding a $10 million ransom, according to the Deseret News. He faces felony charges of making terroristic threats involving a weapon of mass destruction, 911 abuse, and several threats of violence.

In addition to the threats he made in his own community, investigators are looking into whether he is the source of a series of 'swatting' calls, made against targets across the country. 'Swatting' consists of making a 911 call and reporting a fake incident that requires a SWAT team response at a home or business as an act of revenge or harassment.

Police say the teen, -- who now takes online courses -- made the bomb threat against his former high school and threatened to open fire on anyone who appeared to defuse the non-existent  explosives. He also demanded $10 million ransom and later made threats against Saratoga Springs police officers and their families on a Facebook account he set up.

According to police, no weapons or bomb-making materials were discovered at the boy's home.

Despite using "fairly sophisticated techniques" to cover his tracks online, the police -- working the FBI Joint Terrorism Task Force -- were able to track the teen down Thursday, taking him into custody and confiscating computers and other electronic devices in his home.

The teen, described by neighbors as "quiet" and a "computer nerd" was interviewed by authorities at his home before being taken away.

"They brought a kid out on the porch over there. He had glasses, wearing a red and gray shirt, had know idea what was going on," said neighbor Jessica Allred. "They were just sitting there interviewing him for the longest time, at least an hour. I don't know if that was the kid or not."

According to authorities, the teen has no record, but indicated ""general disdain for law enforcement in general."

Besides the possibility of being tried as an adult on multiple felony charges, authorities may also seek restitution for the hundreds of man hours involved to track the teen down.

Police had been providing extra patrols around the school since the threats were posted on Tuesday.

The teen was booked into a juvenile detention facility in Utah County and faces both state and federal charges.

[Young man with laptop is looking back on Shutterstock]