What's past is prologue: What have we learned in the 49 years since the Watts Rebellion? 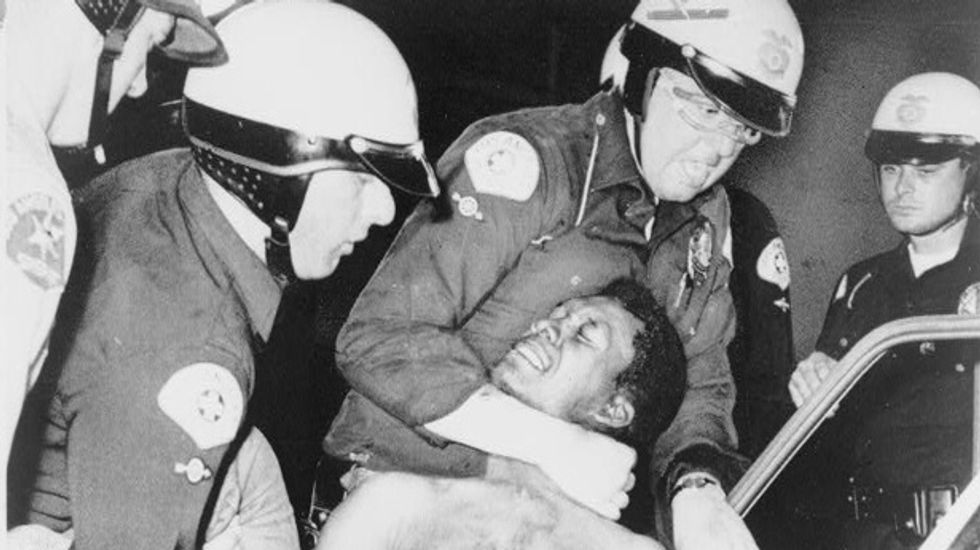 Forty-nine years ago, this very week, the largely African-American neighborhood of Watts exploded into 6 days of civil disorder and violence.

It was the largest riot in Los Angeles history until the 1992 riots that followed the Rodney King verdict.

Some of the parallels to what's been happening in Ferguson, Missouri the last few days are unsettling. But, there are a few key differences.

On August 11, 1965, Marquette Frye, who was African-American, was pulled over for reckless driving by Lee Minikus, a white California Highway Patrol officer. A sobriety test found Frye intoxicated. As Frye waited to be hauled away to jail, his mother, Rena Price, showed up on the scene with Marquette's brother Ronald.

The situation quickly escalated: Someone shoved Price, Frye was struck, Price jumped an officer, another officer pulled out a shotgun. Backup police officers attempted to arrest Frye by using physical force to subdue him. After rumors spread that the police had roughed Price up and kicked a pregnant woman, angry mobs formed.[8][9] As the situation intensified, growing crowds of local residents watching the exchange began yelling and throwing objects at the police officers.[10] Frye's mother and brother fought with the officers and they were eventually arrested along with Marquette Frye.[11]

After the arrests of Price and the Frye brothers, the crowd continued to grow. Police came to the scene to break up the crowd several times that night but were attacked by rocks and concrete.[12] A 119-square-kilometer (46-square-mile) swath of Los Angeles would be transformed into a combat zone during the ensuing six days.[13]

Those are the facts, Jack.

But, as the James Ellroy masterpiece LA Confidential was so adept at portraying, Los Angeles -- like a lot of cities -- has had a long, disturbing history of racist cops.

On August 13, 1965, LA Police Chief William Parker -- the real-life chief who tried to rehabilitate the LAPD's reputation after the real-life Bloody Christmas -- called in 2,300 California National Guardsmen to help the police "restore order" to Watts.

By midnight on August 14, there were 3,900 Guardsmen on the streets.

The streets of Watts resembled an all-out war zone in some far-off foreign country, it bore no resemblance to the United States of America.

Which brings us to Ferguson, Missouri.

As many have noted, Ferguson, Missouri, currently looks like a war zone. And its police—kitted out with Marine-issue camouflage and military-grade body armor, toting short-barreled assault rifles, and rolling around in armored vehicles—are indistinguishable from soldiers.

I don't personally remember the Watts Riots. I was only 2-years-old in 1965. But, I grew up hearing about that infamous week frequently because my family lived very close to that part of Los Angeles. And because my uncle -- who thought he'd be kicking it in the Mojave Desert instead of going to Vietnam -- was one of those 3,900 California National Guardsmen sent to Watts to "restore order." The adults around me made it all sound very frightening.

I do remember the night Obama was elected in 2008 like it was yesterday. I was at a friend's house in Philly with dozens of other celebrants. And although the outcome was expected for weeks ahead of election day, like millions of Americans over the age of 35, I could barely process the idea of America having its first African-American President. Overwhelmed, I went outside to have a cry. My friend followed me out and asked me what was wrong. I remember babbling "unimaginable-something-Black-President-something."

And then, I specifically said, "The next four years are going to be hell."