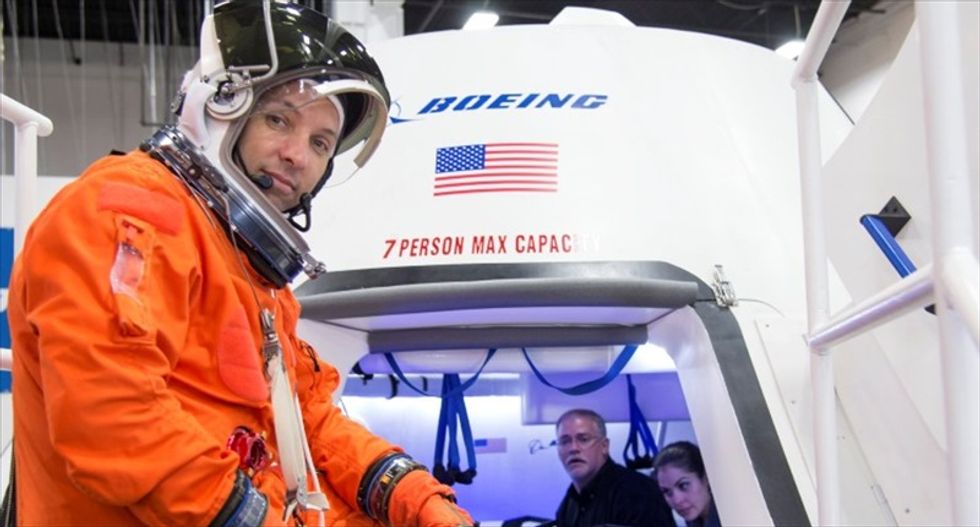 Boeing Co's proposal to develop a so-called space taxi for NASA astronauts includes a seat for paying tourists to fly to the International Space Station, the company's program manager said on Wednesday, a first for a U.S. space program.

The $4.2 billion, five-year contract allows Boeing to sell rides to tourists, Boeing Commercial Crew Program Manager John Mulholland told Reuters, adding that the price would be competitive with what the Russian space agency now charges to fly tourists to the orbital outpost.

"Part of our proposal into NASA would be flying a Space Adventures spaceflight participant up to the ISS," Mulholland said, referring to a Virginia-based space tourism company that brokers travel aboard Russian Soyuz capsules.

Now that Boeing has won a share of NASA's space taxi contract, "we hope ... to start working with the ISS program to make it happen," he said. "We think it would be important to help spur this industry."

Space Adventures is scheduled in January to begin training British singer Sarah Brightman for a 10-day visit to the station, a trip costing $52 million, according to Tom Shelley, president of Space Adventures.

Brightman is slated to become the eighth paying passenger to travel to the station, a $100 billion research complex that flies about 260 miles (418 km) above Earth.

Boeing's first test launch of the taxi is not expected until 2017.

Under the contract, Boeing is responsible for cost overruns and the cost of delays. The aerospace company appears to be confident it can produce the taxi without lowering the operating margin in its networks and space business, which was 7.8 percent last quarter.

But Boeing faces competition from rival Space Exploration Technologies, or SpaceX, which also won a NASA contract and says it can develop the taxi for nearly 40 percent less than Boeing.

SpaceX already plans to offer trips to tourists, but did not immediately respond to questions about whether it would fly tourists on its NASA missions.

The NASA contracts awarded on Tuesday to Boeing and SpaceX cover design, building, testing their spaceship and up to six missions to fly astronauts to the station, a pace of roughly two per year. California-based SpaceX, owned and operated by technology entrepreneur Elon Musk, says it can create and fly the taxi for $2.6 billion, compared to Boeing's $4.2 billion bid.

"I think it's a vital next step in SpaceX's progress," Musk said in an interview on FOX Business Network.

Most of the price difference appears to be the rocket.

SpaceX's Dragon capsule will fly on the company's Falcon 9 boosters, which cost about $61 million for satellite-delivery missions. Boeing’s CST-100 capsules will fly aboard Atlas 5 rockets, which are manufactured and flown by United Launch Alliance, a partnership of Lockheed Martin Corp and Boeing. The rockets, which are powered by a Russian RD-180 engine, cost about $150 million apiece.

The taxi project appears to be well within Boeing's core space capabilities, which suggests it will not have trouble meeting its cost and schedule targets, analysts said.

"They're not pushing the envelope in terms of technology the way SpaceX is" in developing a new rocket, said Ken Herbert, an analyst at Canaccord Genuity in San Francisco. The contract revenue would hit Boeing's income statement mostly in 2017 and 2018, he added.

Separately, Boeing and Lockheed announced on Wednesday that United Launch Alliance would invest heavily in a new rocket engine being developed by Amazon.com Inc founder Jeff Bezos and his private company space company Blue Origin. The agreement is aimed at freeing the United States from its dependency on Russian-made engines for rockets for launches and is expected to have little effect on the space taxi.

Meanwhile, SpaceX has been aggressively exploiting the price advantage of its American-made rocket to try to break ULA's monopoly on launching the U.S. military's satellites. A lawsuit contesting the Air Force's last contract with ULA is pending in a U.S. court.

The company also has been successfully wooing commercial satellite launches, a business estimated to be worth $2.4 billion a year, a 2014 Satellite Industry Association study shows.

So far, the company's Falcon 9 rockets have flown 12 times, all successfully. ULA's Atlas 5, which is mostly used by the U.S. military, made its 49th successful flight late on Tuesday.