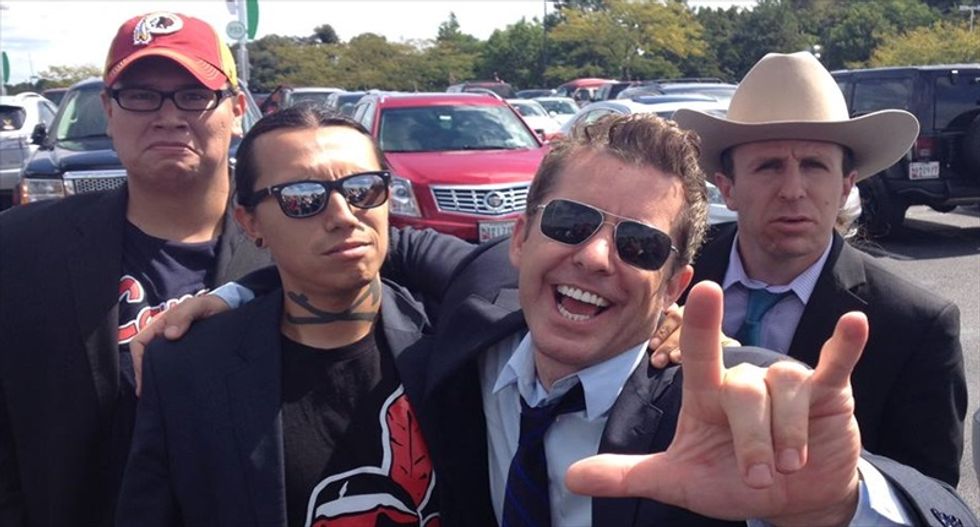 One of the Native American guests featured on The Daily Show on Thursday said Washington, D.C. football fans mocked and threatened him during the making of the segment.

"A blonde little wisp of a girl completely freaked me out as I waited in line for the bathroom," comedian and educator Migizi Pensoneau wrote in a column for the Missoula Independent."'“Is that shirt supposed to be funny?' she asked motioning to my satirical 'Caucasians' T-shirt. And then she said, 'I'll f*cking cut you.' Actually, she didn't scare me so much as the wannabe linebackers standing behind her who looked like they wanted to make good on her threat."

Pensoneau and members of his comedy group, the 1491s, attended the game with correspondent Jason Jones, though they were not shown interacting with fans. They were also part of a group of eight Native Americans Jones interviewed in a panel discussion.

"I think back to the tailgate: the man blowing cigar smoke in my face, the man who mockingly yelled, 'Thanks for letting us use your name!', the group who yelled at us to 'go the f*ck home,' the little waif who threatened to cut me, the dude who blew the train horn on his truck as I walked by the hood," Pensoneau recalled.

Jones' report also featured an interview with a group of Washington fans who appeared on camera wearing team apparel. One of the fans, identified as 56-year-old Kelli O'Dell, seemed to welcome the idea of discussing the issue with Native Americans who have called for the team to stop using a racial slur as its name.

"I think sometimes the conversation that's happening right now is that we need to be sitting down talking to the people that are offended," she was seen saying.

However, O'Dell reportedly called the police after Jones brought in Pensoneau and the Native group.

Pensoneau wrote that 1491s member Bobby Wilson handed her his handkerchief when she started crying, a shot that made air, though the discussion between both groups did not. O'Dell later said she "felt in danger," an accusation Pensoneau addressed in his column.

"I realized that was her defense mechanism, and that by overly dramatizing her experience, she continued to trivialize ours," he wrote. "It was privilege in action. And as I realized these things, something else became incredibly clear: She knew she was wrong."