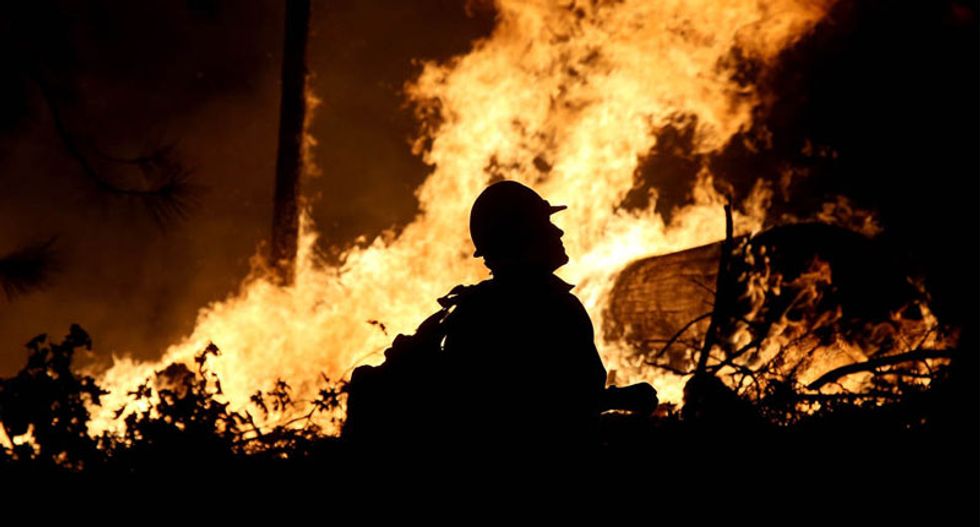 A firefighter monitors the King Fire as it burns through brush in Fresh Pond, California, on September 17, 2014 (AFP Photo/Justin Sullivan)

Climate change is no longer viewed by mainstream scientists as a future threat to our planet and our species. It is a palpable phenomenon that already affects the world, they insist. And a brief look round the globe certainly provides no lack of evidence to support this gloomy assertion.

In Bangladesh, increasingly severe floods – triggered, in part, by increasing temperatures and rising sea levels – are wiping out crops and destroying homes on a regular basis. In Sudan, the heat is causing the Sahara to expand and to eat into farmland, while in Siberia, the planet's warming is causing the permafrost to melt and houses to subside.

Or consider the Marshall Islands, the Pacific archipelago that is now struggling to cope with rising seas that are lapping over its streets and gardens. Even the home of the country's president Christopher Loeak is feeling the effects. "He has had to build a wall around his house to prevent the salt water from inundating," Tony de Brum, the islands' foreign minister, revealed recently.

"Our airport retaining wall that keeps the saltwater out of the landing strip has also been breached. Even our graveyards are also being undermined – coffins and bodies are being dug out from the seashore."

Across the planet, it is getting harder and harder to find shelter from the storm. And things are only likely to get worse, say researchers.

As Europe continues to heat up, energy demands are expected to drop in northern countries, but equally they are destined to soar around the Mediterranean and in the south where there will be a desperate need for cooling and air-conditioning that will drive up power costs.

By the middle of the century, forest fires and severe heatwaves will be increasingly common while crops will be devastated and vineyards will be scorched.

Similarly, in the Alps, lack of snow and melting ice will make skiing, walking and climbing far less enticing for tourists. So if you are planning to cash in that little nest egg you have been nurturing to buy a retreat on the continent, think very carefully which part of Europe you pick. By this reckoning, Norway looks a good bet, as does Scotland.

Other parts of the world face different problems created by the billions of tonnes of carbon dioxide that we now pump into the atmosphere from factories, power plants and cars. In Asia the main issue concerns the presence and absence of water. In the south-east of the region, continued sea-level rises threaten to further erode farmlands and coastal towns and cities, while inland it will be water scarcity that will affect most people's lives. In this latter case, higher temperatures will combine with lack of water to trigger major reductions in rice yields.

In its latest report, the Intergovernmental Panel on Climate Change estimates that up to 139 million people could face food shortages at least once a decade by 2070.

Perhaps most alarming of all the forecasts that concern the future warming of our planet is the work of Camilo Mora at the University of Hawaii. His research – which involved using a range of climate models to predict temperatures on a grid that covered the globe – suggests that by 2047 the planet's climate systems will have changed to such an extent that the coldest years then will be warmer than even the hottest years that were experienced at any time in the 20th century.

"Go back in your life to think about the hottest, most traumatic event you have experienced," Mora said in an interview with the New York Times recently. "What we are saying is that very soon, that event is going to become the norm."

In other words, our species – which is already assailed by the impact of mild global warming – is now plunging headlong into an overheated future for which there are no recorded precedents.