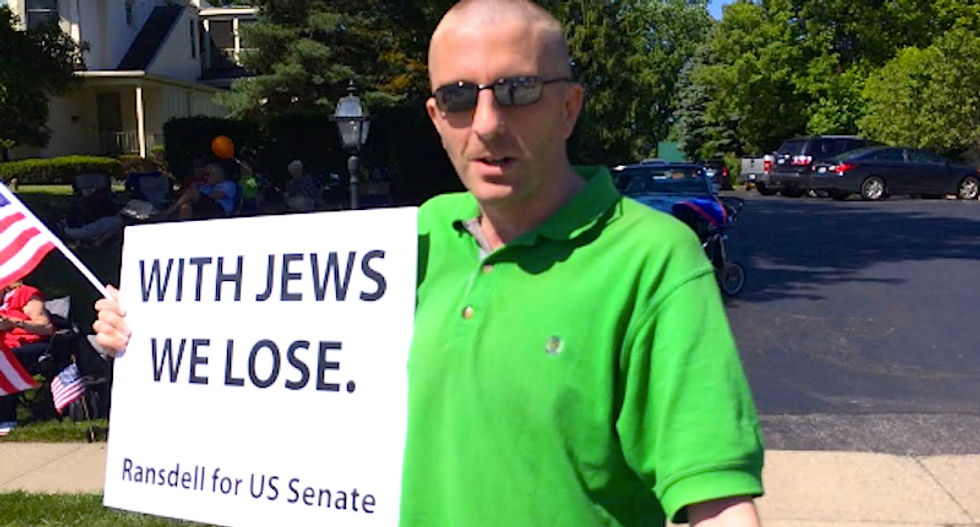 A white supremacist is running a write-in campaign for U.S. Senate in Kentucky to promote his anti-Semitic slogan: “With Jews we lose.”

Robert Ransdell’s name won’t appear on ballots, but county clerks must count write-in votes for the Cincinnati-area coordinator of National Alliance who is also affiliated with the Ku Klux Klan.

The Florence, Ky., resident drew recent attention for about 20 signs he placed this week in the Boone County area, advertising his campaign and his message.

“I believe that there is no such thing as racial equality,” Ransdell told WLWT-TV. “You see that in our cities everyday.”

Although Ransdell concedes he cannot win the race against U.S. Senate Minority Leader Mitch McConnell (R-KY) or well-funded Democratic challenger Alison Lundergan Grimes, his campaign is essentially testing the limits of a state law banning the removal of political advertisements.

“For years White Nationalist (sic) have looked on with disgust as various anti-White lemmings and creeps have taken it upon themselves to decide what people will read and be exposed to and have taken to removing flyers and other promotional materials distributed to the public by White Nationalists,” Ransdell said in a lengthy post at the white supremacist website Stormfront. “This campaign may well see the first of these idiots actually prosecuted for doing the same to one of my campaign signs, it is in fact a misdemeanor in the State of Kentucky.”

However, Kentucky law also requires political signs to identify who paid for political advertisements and the address for the responsible party.

Ransdell’s hand-lettered black-and-white signs did not show the address, and they were removed by the property owner – who said the candidate did not seek or receive required permission to post the advertisements.

The University of Kentucky apologized Wednesday after Ransdell showed up at a Constitution Day event on campus, where he spoke to a gathering of high school students and apparently put up at least one sign outside the journalism building.

"We believe the organizers at UK invited this person as a way to challenge the students to write a piece about his provocative views, but the perceived educational merit of the activity was not apparent to anyone," wrote Liz Palmer and James Miller, a pair of journalism teachers from duPont Manual High. "The teachers were not informed by the university that they would be providing a platform for a white supremacist at the event and the high school students, ages 14-to-18, were presented with his racist language and ideas as part of the normal course of speakers and presenters."

The university said the event was federally mandated, and Ransdell was invited because he was a qualified, registered write-in candidate.

"Constitution Day is not about politics, it is a celebration of the principles of the Constitution," the university said in a statement. "All speakers are asked to focus on those principles. Unfortunately, Mr. Ransdell included his political beliefs and platform in his comments."

The university said officials were not aware of what Ransdell would say prior to the event and did not condone or endorse his views.

Ransdell was chased away from a Fourth of July parade this summer in Fort Thomas, where residents objected to his hand-held anti-Semitic sign.

He has also turned up in previous news reports from 2009, when the student newspaper at Northern Kentucky University apologized for running an advertisement placed by Ransdell for a website selling white supremacist music.

Ransdell was quoted in March by the Kentucky Enquirer during the "White Man March" rally he organized his hometown, about 20 miles south of Cincinnati.

"That is one thing you guys love to say, 'It is 2014, how can these racists be out here?'” Ransdell said at the time. “Well, it is 2014. It has been six or seven decades since white people stood up for themselves, and it is about time we start doing so.”

He plans to place about 200 more signs around Kentucky in the coming weeks, although he didn’t specify whether he would gain permission from property owners or list his campaign address.

"I am absolutely chomping at the bit going forward with my campaign, only about a month until I am on the air, mainstream radio, primed to start a legitimate 'conversation' about race, as in a racially conscious White man letting loose on the problems we face, that so many of our people are beginning to wake up to," Ransdell posted at Stormfront.

In the highly unlikely event he is ever elected to public office, Ransdell promises to dismantle “Jewish control” of the media, end U.S. support for Israel, stop U.S. intervention in Muslim countries and deport all Muslims living in the U.S., and establish “White Guard” patrols in certain high-crime areas.

“These patrols will be made up of men who come forward professing their belief that it is time to stop simply watching our people be victimized while the system (police, local officials) does a ridiculously awful job in doing anything of substance about the problem,” Ransdell wrote.

He insisted these roving bands of armed white men would not actively seek physical confrontation with racial minorities, but would instead act only in self-defense or to assist white people under attack.

“White people must have a Whites-only nation in America to survive and prosper, period,” Ransdell wrote. “We cannot prosper, we can only cope, when we permit and allow Jews, Blacks, and other non-Whites into our living space and the long term health of our people is in peril as long as they are permitted to live amongst us.”