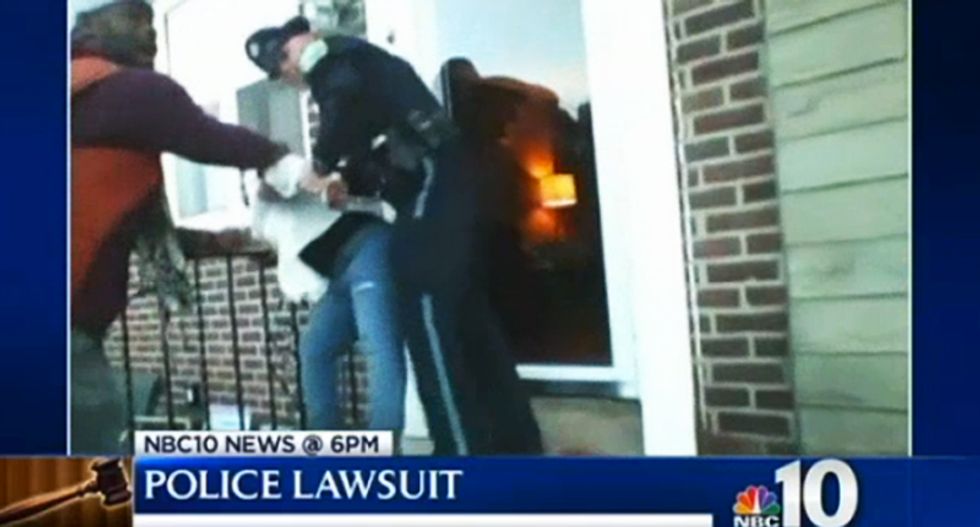 A Pennsylvania family has filed a federal lawsuit alleging three Collingdale police officers entered their home without permission to confiscate a cell phone being used to record the officer's actions in front of their home.

Kia Gaymon, 38, and her husband Michael Gaymon, 35, state in the suit that one officer, identified as Officer Carl White, burst into the home without a warrant and arrested her after threatening to use a taser on her, according to NBC10.

In the suit, the officers are accused of unlawful arrest, malicious prosecution, retaliatory arrest, and unlawful search.

According to the Gaymons, the February 22 altercation began when police were called out because a family member had parked her car illegally. The Gaymons state that, as one officer became overly aggressive with his questions, Mrs. Gaymon pulled out her cell phone and began recording.

Noticing that he was being recorded, Officer White advanced on Gaymon demanding she turn off her phone, stating it was illegal to record him without his permission.

Mr. Gaymon and the couple’s 21-year-old daughter, Sanshuray Purnell, told the officer he was wrong and that she had the legal right to film him. According to the lawsuit, the officer then told Mrs. Gaymon that if she didn’t stop recording him he would enter her home, take away her cellphone, and arrest her.

After refusing to allow him to enter her home the officer then  handcuffed Purnell. Mrs. Gaymon says a second officer then escorted Purnell away from the scene.

White then allegedly entered the home, ignoring the couple’s demand that he not come inside, and demanded the phone, placing a taser against Mrs. Gaymon's chest and threatening to use it.

The suit states that two officer then arrested Mrs. Gaymon along with her daughter and charged them both with disorderly conduct.

The family's attorney said the police had no cause to enter the home illegally and make an arrest.

“The actions that are described in the citation are for videoing the officer,” said Jonathan Fienberg. “It’s not a crime.”

Mrs. Gaymon and Purnell appeared before a judge on May 22 and, after hearing their testimony, the judge dismissed all  charges against them.

According to the lawsuit,  the officers, “had no legal cause to believe that any plaintiff committed any crime” and that they “maliciously initiated a criminal prosecution.”
The lawsuit also accuses the officers of illegally entering the home without a warrant.
The Collingdale Police Chief has not responded to the suit, deferring to the department's solicitor.

Watch the video below from NBC10: