Morning sickness and growing breasts: Why some men develop signs of pregnancy 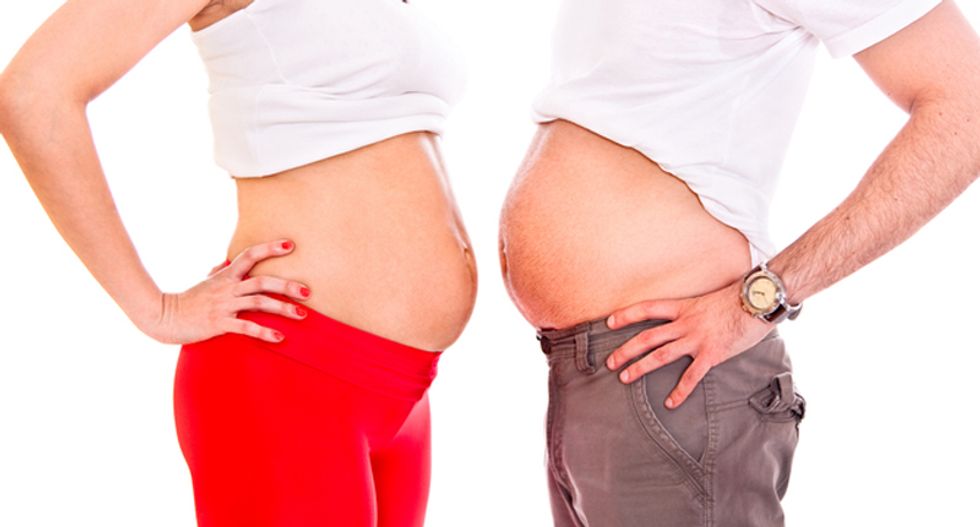 Harry Ashby, the 29-year-old security guard who was signed off work with morning sickness, cravings, a growing stomach and breasts during his girlfriend’s pregnancy, was told he had Couvade syndrome.

Couvade is an involuntary manifestation of pregnancy in men with a partner who is expecting a baby – sometimes called “sympathetic pregnancy”. It isn’t a medically recognised physical or mental disorder, and it isn’t explained by injury or illness.

A range of “pregnancy-related” physical and psychological symptoms include abdominal pain and bloating, back pain, pseudocyesis (euphemistically known as “phantom pregnancy”), lethargy, morning sickness, toothache, food cravings and aversions – many of which were confirmed in a study we carried out at St George’s hospital, in London. Prominent psychological symptoms include ante-natal depression and mood swings, early morning waking, anxiety, poor concentration, distraction and memory loss.

Collectively, these symptoms may signify an empathic identification with a pregnant partner and to the man’s unborn child, but the could also be a resolution of unconscious thoughts that might threaten both.

While the syndrome primarily occurs in developed countries all over the world, the number of new cases in those countries varies. Several studies have found an incidence of between 25-52% of all men with a pregnant partner in the US; 20% in Sweden, and an estimated 61% in Thailand, though this includes mild to extreme symptoms such as the physical ones above. The incidence in the UK is unknown, but estimates in the 1970s put it between 11%-50%.

A range of theories that have been proposed to explain Couvade syndrome. Along with psychoanalytical and psychosocial explanations, they also include emotional attachment to both the unborn child and partner, and hormonal influences.

Psychoanalytical theory proposes that the syndrome evolves from the man’s envy of the woman’s procreative ability. The theory also proposes that for the male partner, the pregnancy acts as a catalyst for the emergence of ambivalence and the resurgence of oedipal conflicts. The event may cause regression – the man’s retreat to childhood feelings and conflicts triggered by his partner’s pregnancy, such as rejection, exclusion, ambivalence and anxiety – with a sense of passivity and dependency that is intensified by the developing foetus and which conflicts with the man’s need for autonomy.

A second psychoanalytical theory proposes that expectant fathers may sometimes view the unborn child as a rival for maternal attention. Some have explained this as the expectant father’s interpretation of the unborn baby as a rival from whom attention is diverted. But this is expressed through a more socially acceptable outlet such as the syndrome. This interpretation would suggest that the syndrome has a protective function for the man because it enables him to identify with his pregnant partner and strengthens his protective instincts towards her and the baby.

Psychosocial theory, which takes in social circumstances, instead focuses on a marginalisation of men during the woman’s gestation and childbirth, especially among men who are having their first child. While motherhood is an important defining feature for women, the same may not be true for fatherhood and men; expectant women have their maternity careers endorsed commercially, socially and medically in contrast to the careers of prospective fathers. Since the 1970s men have become familiar figures in the delivery room and their attendance is now almost obligatory.

The fact that men can’t actually give birth or experience delivery directly can relegate men to an ancillary role where they feel marginal and sometimes useless. To resolve this ancillary status during gestation and childbirth the man inadvertently diverts attention from the woman to himself through a display of the Couvade syndrome. However, this implies that the syndrome is a conscious entity, which I and others, such as Arthur Klein reject.

Paternal transitional theory proposes that the transition to fatherhood is potentially pathological, involving disruptive interpersonal struggles that are highly stressful.

According to Klein the transition from dyad – two tied entities such as man-wife – to a triad – group of three – constitutes one of the most cataclysmic periods for the expectant man. This may be compounded by the fact that men usually accept pregnancy but without any concomitant physical changes that reinforce its reality. They lack the biological markers of the transition to parenthood and these “disembodied” experiences of pregnancy are very different from the woman’s experiences. This in turn causes multiple conflicts during transition, including jealousy and rivalry with the unborn baby, an intensified ambivalence toward their own parents and sexuality conflicts. With all of this going on, it wouldn’t be surprising to see some psychological fallout.

Yet paradoxically, men who have had preparation for their parental role – ante-natal classes, for example – show a higher susceptibility to being afflicted the syndrome. Attachment theory proposes that the man’s closeness to the foetus gives rise to the syndrome. In a seminal study published in 1983, a sample of white middle-class, first-time expectant men found a modest correlation between more paternal-foetal involvement and attachment (feeling and hearing the unborn child kicking, confirmation through the woman’s pregnancy symptoms and the ultrasound scan) with the incidence of six physical symptoms of the syndrome. These included feeling more tired (34%), sleeping difficulties (33%), indigestion (14%), stomach upsets (12%), appetite changes (8%) and constipation (6%). The investigators concluded men’s symptoms were a reflection of their level of attachment to the unborn child and involvement in the pregnancy.

Attack of the hormones

Couvade syndrome also appears to show a relationship with hormones, but there is a dearth of research investigating such an association. To date only two studies have supported a hormonal basis for the syndrome, one published in 2000 and another in 2001. The findings of both indicated a significant increase in men’s levels of the hormones of prolactin and oestrogen in the first and third trimesters of pregnancy, but lower levels of testosterone and the stress hormone cortisol. These hormonal changes were associated with the display of paternal behaviours as well as Couvade symptoms of fatigue, appetite changes and weight gain.

So a plethora of different theories have offered accounts for the origins of the syndrome. However, some of these, such as the hormonal explanation, have not been investigated sufficiently. And those that have, psychosocial reasons for example, clearly show disparate findings, which weakens a definitive conclusion that the syndrome has roots in this. Suggested directions for future research in the area might focus more hormonal associations with the syndrome.

Arthur Brennan does not work for, consult to, own shares in or receive funding from any company or organisation that would benefit from this article, and has no relevant affiliations.